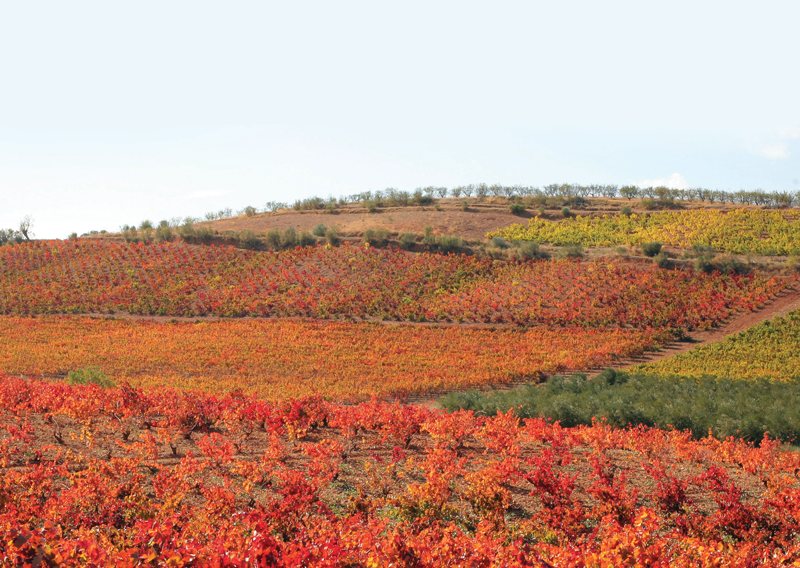 A rising tide lifts all boats, as the saying goes. That has been the steady philosophy behind Bodegas San Valero, one of the most important cooperative producers in the Cariñena region of northeastern Spain. Over the past 75 years, Bodegas San Valero has worked to transform the quality of Cariñena’s wines by bringing education and support to local growers, and innovation and quality control to their winemaking. 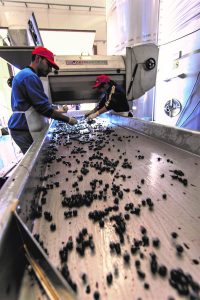 Bodegas San Valero has pioneered the introduction of modern equipment in their winemaking facility, as well as quality-enhancing techniques such as hand-sorting grapes.

Cariñena, the largest D.O.P. in Aragón, was recognized early on as a promising wine region. With a winemaking history that dates back to the third century B.C., it became the second official region designated in Spain in 1932. Its rocky soils, relatively high altitudes and extreme day-night temperature swings are ideal for growing a range of grape varieties in many styles. But the region struggled to compete with the greater world of wines, and the wines failing to gain traction beyond Spain threatened the economic viability of viniculture in the region.

For many small growers—today there are more than 1,500—the simplest approach was to sell their fruit to be bottled in bulk, rather than under the region’s D.O. Looking to change this, 66 growers banded together in 1944 to work together as Bodegas San Valero (BSV). Today, the winery has nearly 700 cooperative partners and is one of the most important economic powers in the region.

Bodegas San Valero’s winemaking philosophy is founded on three things: innovation, tradition and quality. Through the years, the winery has been a pioneer of technology in the region, using modern winemaking equipment and techniques to enhance the traditions of the region. Bodegas San Valero was the first winery in Aragón to introduce industrial bottling, and in 1983, it implemented innovative quality control practices to monitor grapes during harvest.

These technological upgrades proved key to improving the overall quality of the wines produced in Cariñena, making them cleaner, emphasizing purity of fruit, and allowing the wines to better translate terroir. 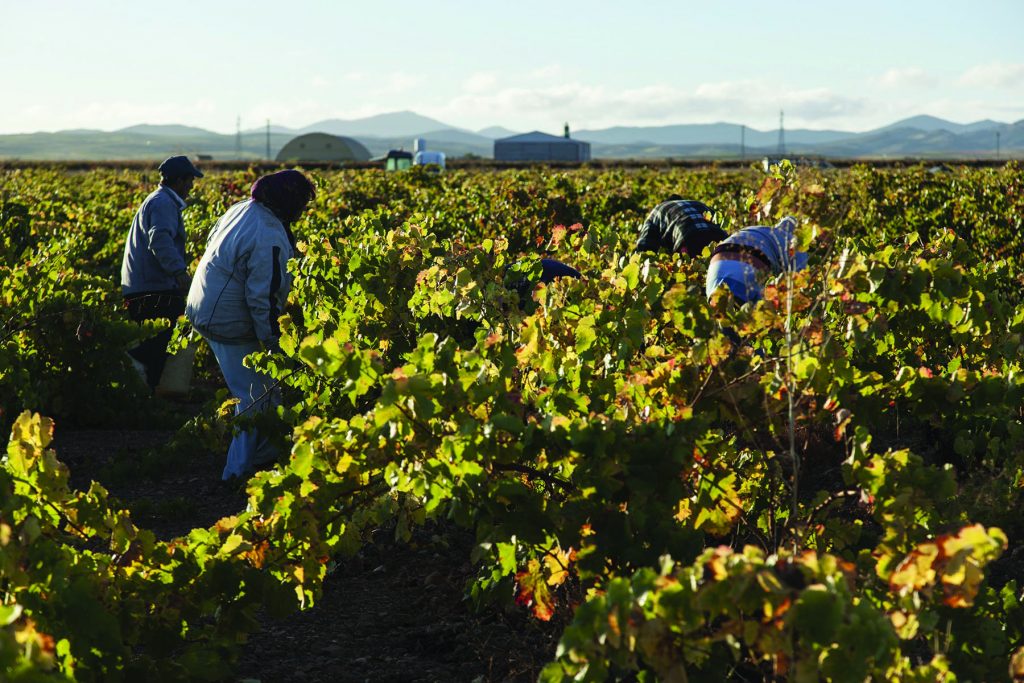 The vineyards of Cariñena explode with color in autumn. Working with 700 cooperative partners, Bodegas San Valero has a quality control department within the winery overseeing a team of viticulturalists who consult with individual growers throughout the growing season.

Despite sharing a name with—and being the birthplace of—the Cariñena, (Carignan) grape, the variety most important in the Cariñena D.O.P. is Garnacha. Known as Grenache in France, where it is an anchor of the Rhône Valley, Garnacha thrives in Cariñena’s rocky soils and dramatic temperature swings. As Cariñena can rely on this resilient variety to withstand even the harshest of conditions, it is home to one of the highest concentrations of old-vine Garnacha in the world. 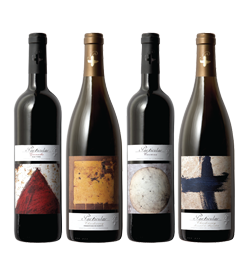 BSV’s Particular labels were inspired by the traditional way in which winemakers distinguished the different casks with simple graphics.

In an effort to protect not only these old Garnacha vines, but all of Cariñena’s vineyards, Bodegas San Valero has made vineyard  management and grower education a cornerstone of their business. “Bodegas San Valero is very committed to the region and its people,” says Javier Domeque, Marketing Director. “We always try to give the professional work to the people of Cariñena in order to bring value to the region.”

In addition to the winery’s viticulturalists, who lead the work in the vineyards, Bodegas San Valero created an “Atria” department within the winery that works to ensure that grapes grown by partners are in pristine quality. They review all of the cooperative vineyards and work with farmers directly to advise them of best practices in the vineyard. This helps to combat vineyard problems while minimizing pesticide use, raising both the consistency of vineyard care and the quality of the wines.

Having overcome the quality hurdle in Cariñena, Bodegas San Valero continues working to bring greater worldwide recognition to the region as a source of value-driven, high-quality wine—particularly Garnacha. With over 45 brands, BSV is in position to supply wines to represent Cariñena. Parts of the portfolio are currently available in more than 30 countries around the world, notes an export department representative. In the U.S., the winery is particularly focusing on Florida, California, New York, Illinois and Texas.

Likely the most well-known wines from Cariñena are found under Bodegas San Valero’s Particular label—a line of red, white, and rosé wines designed to meld tradition with modernity while sourcing fruit from the winery’s best vineyards. The region’s tradition of old vines, for instance, is celebrated with the Particular Old Vine Garnacha, a structured and spicy red that remains approachable and remarkably affordable at under $15. Other options in the Particular line include a barrel-fermented Chardonnay, a Garnacha Rosé and a varietal bottling from the Cariñena grape, among others. 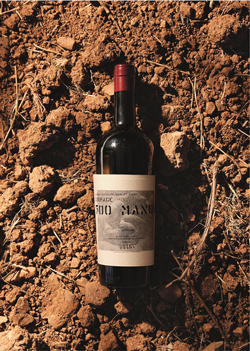 500 Manos, a robust blend of Cabernet Sauvignon, Merlot and Syrah, is a tribute to the growers who start great wines by hand.

While some of their wines are quite limited in production, Bodegas San Valero has plenty of other wines that combine quality and value, expressing clear points of distinction. The Origium 1944 wines, named for the year of the winery’s founding, offer a taste of the pure quality that Bodegas San Valero is known for, in white, rosé, and both young and aged red versions. The Sierra de Viento wines celebrate the strong, dry “cierzo” wind that is so important to the grapes in Cariñena’s vineyards, showcasing fresh fruit and bright acidity in both stainless steel and oak-aged versions.

As the proverbial tide continues to rise for Cariñena, the D.O.P. is poised to jockey for position as the go-to region for affordable, delicious wines that deserve to be everyday staples for U.S. consumers. But without the efforts of cooperative producers like Bodegas San Valero, the bottles may have never left Spanish shores. After 75 years of believing in the potential of this underappreciated region, Bodegas San Valero is finally seeing the world recognize these wines, too.