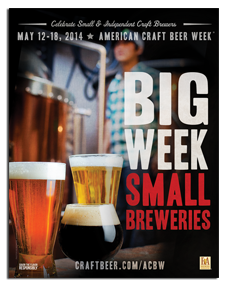 From May 12-18, beer lovers everywhere will toast the country’s craft beer renaissance during the ninth annual celebration of American Craft Beer Week (ACBW).

With more than 2,800 small and independent craft breweries and hundreds more popping up across the country every year, the observance of ACBW is more significant than ever before. Across all 50 states, craft beer lovers, breweries, wholesalers and retailers will celebrate the culture and community of craft beer.

“American Craft Beer Week allows everyone to honor and toast the hard work and success of the craft beer community,” said Julia Herz, publisher of CraftBeer.com and craft beer program director at the Brewers Association. “Against many odds, craft brewers have used grassroots efforts to grow the industry one glass, one bottle, one can, one keg, one growler and one customer at a time.”

New this year, ACBW celebrates the many faces of craft beer. Presented in a video montage, brewers from all 50 states have united by taking “selfies” to best represent their brewery and state. All are encouraged to take their own “selfies” with craft beer from small and independent brewers and post on social media using #ACBW to help celebrate the week.