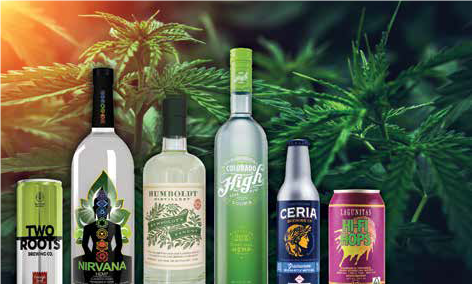 Know this much to start: the United States is embarking on its greatest decriminalization effort since the end of Prohibition. Until the federal government gives its legal green light to cannabis, a confusing and difficult transition will remain difficult and confusing. But the states-rights pattern has been established, and while no one can (yet) say for certain what will happen in regards to beer, wine, and spirits consumption, cannabis is entering the Conversation faster than you can say “don’t bogart that joint.”

“My friends in Colorado, Washington and Oregon are quite candid about potential lost sales, but most are sanguine about the future,” says Kansas City’s Doug Frost, MW, MS. “It’s tremendously challenging because no one knows how the next steps unfold, other than that every state will want a piece of the cannabis tax pie. Regardless, the genie ain’t going back in the bottle.”

Knowing that, what’s the best way to prepare for what’s going to happen? First, understand the parts that make up the legal cannabis market, from a joint to weed-infused consumer products.

Second, accept that the legal and regulatory hurdles will remain hurdles even after cannabis goes mainstream—becoming, perhaps, even more complicated than alcohol’s three-tier system.

Finally, recognize that the alcohol industry is at the biggest crossroads since the end of Prohibition. Younger consumers, who seem less interested in beer, wine, and spirits than their parents and grandparents, will have another option for their time and money.

Moving forward, usage patterns, product development and legislative action are all areas that promise to impact the beverage alcohol industries.

From an overall industry viewpoint, it makes sense to position cannabis as an addition to the adult arena of recreational options. As Chris Stenzel, President of Constellation Brands’ Wine & Spirits Division, noted in a recent interview with Beverage Media, the firm’s $4 billion investment in Canadian company Canopy Growth reflects a belief that cannabis can complement alcohol. “At Constellation, we talk about the three stool legs of the business: Spirits, wine and beer, and we believe cannabis will become the fourth leg to the stool,” said Stenzel.

The operative golden question—“Will people drink less alcohol?”—is beginning to be asked and answered. There is some data on the issue, but several studies contradict each other about whether legal marijuana will cannibalize beer, wine and/or spirits. A 2017 Georgia State study found legal cannabis reduced alcohol consumption over the long term, and alcohol “purchases decreased by 15% in counties in states with medical marijuana laws.”

On the other hand, a 2018 study from the Distilled Spirits Council which analyzed data from 3 states with longest track record (CO, WA, OR) found no such change after recreational legalization. Utilizing state-level tax receipts and actual alcohol shipment data in Colorado, Washington state and Oregon for the two years prior to recreational marijuana legalization and post-legalization, they concluded: “overall alcohol sales mirror national trends and there is no pattern of declining spirits sales in any of the markets analyzed.”

The ink is barely dry on a detailed report by IWSR Drinks Market Analysis and BDS Analytics, released in February 2019. “Though not yet mainstream, cannabis adoption is certainly growing in states where it is legal and does pose a risk to the beverage alcohol industry in the future,” said Brandy Rand, IWSR’s U.S. President. Among the nuggets in their report:

There may be evidence that legal weed slows beer sales in general, on the theory that younger consumers will smoke a couple of joints or pop edibles instead of drinking a six-pack if the price is about the same. But, analysts caution, that decline has been traced to slowing consumption among aging beer drinkers and not competition from cannabis.

There also seems to be a sense, says Bonny Doon’s Randall Grahm, that any change in alcohol consumption will happen at the lower-priced end, in mass-market wine, beer and spirits. Producers like Grahm aren’t worried about “weed as one of the existential threats to the wine business.”

And legal cannabis may boost alcohol tourism. Anecdotal evidence from Colorado suggests the possibility of increased tasting room sales, thanks to the influx of legal weed tourists. “It’s almost as if we’re getting a new audience,” says Karen Hoskins, owner of craft rum producer Montanya Distillers in Crested Butte, CO, describing been her experience in the aftermath of Colorado’s legalization. “They’ll come into the tasting room, and when they’re done, ask us to recommend a dispensary.”

Ultimately, presuming recreational cannabis becomes the norm, availability is going to be a critical factor in whether smoking will hit alcohol more at higher or lower price points. Another wild card is “vaping”—and how the youth-driven popularity of this intake method impacts smoking and drinking.

Not to be discounted in any discussion of cannabis: follow the money. Legalization in Canada has opened the faucet on investment—and it is big fish entering the pond. Constellation Brands, most notably, now owns 38% of Canada’s Canopy Growth. “Constellation has been pretty good at identifying long-term consumer shifts and reacting—buying and exiting assets,” notes Rob McMillan, Executive Vice President and founder of Silicon Valley Bank’s Wine Division in Napa. “They are shedding some wine assets and some point to that being an end to wine and a nod to cannabis and beer, but I think it’s more to do with shedding lines that aren’t in line with premiumization strategies.”

Of course, as the Canadian example is rapidly proving, the free market system is raring to go with new product development. Here, it becomes critical to distinguish types of products we are likely to see—some THC-based, some CBD-based.

Looking at beverages specifically, one 2019 estimate found that U.S. sales of cannabis-based drinks was worth $86 million in 2018 but were likely to grow to more than $1 billion by 2023 and $1.4 billion by 2024. Another, by Canaccord Genuity Group, similarly, forecast a $600 million market for cannabis-infused beverages by 2022.

Sounds big. Now for the catch. For one thing, as of now, beverages represent less than 1% of the overall legal cannabis market. Moreover, there doesn’t seem to be a cost-effective infusion process for THC drinks, which analysts see as crucial to the category’s growth. Essentially, alcohol is water-soluble and cannabis is not. That means alcohol is absorbed into the bloodstream quickly, but the THC in cannabis takes far longer when ingested rather than inhaled—people feel the effects of beer, wine or spirits within a drink or two; it can take an hour or longer for a marijuana brownie to kick in. So the trick with cannabis-infused drinks will be to find a way for them to mimic alcohol’s effect on the drinker, which has met with mixed results so far.

One person in position to assess the direction of new product development is Smoke Wallin, who started in his family’s traditional distribution business, and is now CEO of Vertical Wellness, a company specializing in CBD products. As Wallin sees it, CBD products are the hotspot to watch, especially since 2018’s Farm Bill gave hemp legal status since hemp is a good source for CBD, but not THC.

Even more important: “The number one characteristic of CBD is that it is anti-inflammatory,” notes Wallin, which means new CBD products are going to compete with over-the-counter medicines like Advil. He estimates that Health & Wellness products will comprise about 60% of the CBD market, and food and beverage about 40%.

Vertical Wellness currently has 12 beverages in active development. However, as a veteran of the industry, Wallin knows the products will have to taste good: “If it doesn’t stand alone as a beverage, it won’t work. People will just switch.” The one thing that is absolutely not in doubt: CBD-laced beverages are apt to enjoy a quick route to market. Wallin reports, “We are seeing huge demand from major retailers and distributors. They are all looking for a way to play in the space.”

Three Tiers or Not?

It should surprise no one that distributors are positioning themselves to seize opportunity. Case in point: Southern Glazer’s officially partnering with a marijuana producer in Canada. The interest in cannabis may be seen as a defensive move, at least in part, to protect splintering market share. “Cannabis concerns me because it’s the shiny new thing that consumers are attracted to,” Steve Slater, EVP, General Manager Wine Division, Southern Glazer’s, said on a “Trends” panel at Vinexpo New York in March. “There is a share of discretionary income that can be used for beer, wine and spirits—and now cannabis.”

The next pressing question: Will alcohol’s three-tier system be used to regulate legal cannabis? Analysts expect the Treasury department’s Tax and Trade Bureau, which oversees alcohol, to handle marijuana regulation. But that’s all anyone agrees on.

Most legal states use the opposite of three-tier—a vertically integrated system that doesn’t separate the producer and retailer. It’s OK for a company to grow marijuana and sell THC products in its own state-licensed retail outlets, something that three-tier was designed to stop. But the situations are different, confirms attorney Rebecca Stamey-White, a partner with Hinman & Carmichael LLP in San Francisco: the goal with vertical integration was to emphasize local control, and to avoid the complications of three-tier.

On the other hand, notes Ron Kammerzell, a consultant for the legal weed industry and former senior director of enforcement for Colorado’s department of revenue, three-tier is almost inevitable once the federal government gets involved. How else will it be possible to collect federal taxes? And if cannabis commerce becomes national, businesses will naturally want to trade across state lines and states will want to collect taxes from out-of-state cannabis producers. Three-tier, with its reliance on wholesalers who have almost 100 years of experience in dealing with these concerns in alcohol, can do all of that, Kammerzell says. Plus, the second-tier has the confidence and trust of state regulators.

It’s no surprise, then, that the Wine & Spirits Wholesalers Association, the trade group that represents alcohol distributors, showcased a plan to Congress in December 2018 that would set up a national three-tier cannabis distribution system based on the alcohol model. “We think long-term this is really better for the industry, for society, for our businesses to provide the model of the beverage alcohol industry as an example of what effective safety and regulation looks like,” Michelle Korsmo, WSWA’s new President, told Beverage Media in a recent interview.

Bridges and Tunnels to the Future

As pot history gets written (and rewritten and rewritten), much will ultimately hinge on how the states fall, domino-like. New Jersey and New York are of special interest. Both Governors have already expressed their support for legalization. And the proximity and ease of transverse from NJ to NY means that if one state legalizes, it will put instant pressure on the other.

A behind-doors committee in New York has already begun work on suggested guidelines for legislation. Meanwhile, in New Jersey, many believe their state provides the best evidence that a distribution system for cannabis can and should be modeled on the state’s alcohol control. Fred Leighton, second-generation retailer of Bayway World of Liquor in Elizabeth, NJ, contends: “As a system that both controls a substance in terms of public safety, and has made a wide range of products available, no state does it better than New Jersey.”