Back to Basics: Bourbon 101

When people talk about the worldwide whiskey renaissance, the first word that comes to most minds is bourbon. Sure, other styles are on fire at the moment—Irish, American rye, even Canadian—but the one that’s got most of the globe talking is America’s native spirit.

A couple of decades ago, producers could barely give the stuff away—it was “grandpa’s drink” after all—but today bars in the most far-flung corners of the world (even Scotland!) have multiple shelves dedicated to the U.S.-made, corn-based whiskey.

Where Is It Produced?

Federal law dictates that only bourbon whiskey produced in the U.S. can be called “bourbon.” And the U.S. has numerous trade agreements with other countries to enforce that restriction as well. It is most closely linked to Kentucky, where it originated, where about 95% of it is made and where the style’s most iconic brands hang their hats (and they’re the only ones that can claim the prestigious label, “Kentucky Straight Bourbon”). 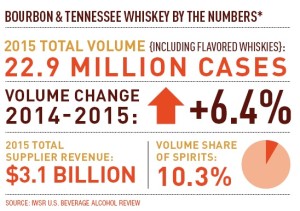 Because bourbon is so closely associated with Kentucky, many had assumed it took its name from the Bluegrass State’s Bourbon County. However, that notion has been challenged and largely debunked. Many historians assert that it’s more likely bourbon took its name from Bourbon Street in New Orleans. True, most of the distillers were in Kentucky, but in the 19th century, a large number of the spirit’s drinkers were in the Big Easy (sent there via the Mississippi River). Eventually people started referring to the whiskey as “that stuff they drink on Bourbon Street,” or so the story goes.

What’s It Made From?
The first rule (and there are several) is that bourbon’s mash bill must be at least 51 percent corn (though many go considerably higher). The remainder tends to be wheat, rye, barley or any combination of those.

Decisions to be made at the distilling stage include the ratio of corn/grains; types of yeast; and distillation strength and barrel strength.

Elijah Craig embraces not only bourbon’s historic origin, but also its current-day quality and range of expressions. The brand is named for the Rev. Elijah Craig, aka the “Father of Bourbon,” the man who first stored his whiskey in barrels that had been charred in a fire. Production of Elijah Craig Bourbon remains unapologetically hands-on.

The brand’s most important expression, Elijah Craig Small Batch, was first introduced in 1986, before the term “small batch” was ever popularized. Among its signature qualities:

Elijah Craig Small Batch was awarded a double gold medal at the San Francisco World Spirits Competition. It has twice been awarded “Best of the Best” from Whisky Magazine. And in 2014, the Small Batch won a Gold Medal at the WSWA Spirits Tasting Competition.

Combine all ingredients in a mixing glass, add ice and shake until well chilled. Strain into a cocktail glass and garnish with a Luxardo cherry.

Now About Those Barrels…

It can be argued that bourbon was the first purposefully wood-aged whiskey style. The barrel rules and regimens continue to play a huge role in the finished product:

But lucky for Kentucky, the wood needn’t be retired. Bourbon rules may dictate single use for the barrels, but most other whisk(e)y styles have no such requirement. Ex-bourbon barrels have held everything from Scotch to Japanese whisky (ex-Sherry casks are quite popular as well), for varying periods of time, depending on the particular flavor profile the distiller wishes to achieve. The used
bourbon casks are more in demand than they’ve ever been, especially as barrel-aged craft beers have become all the rage.

The distinctiveness of Kentucky Bourbon owes a great deal to the limestone-rich water in the state, known for its alkalinity (high pH, the opposite of low-pH acidity) and its minerality. 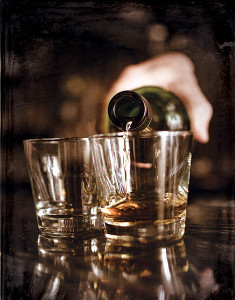 Although it did not become official until 1964, bourbon is the only distinctly American spirit. And it has never been better and more varied in options as it is today. For whiskey novices, bourbon is a good choice because its taste profile is sweeter than malt whiskies. Connoisseurs will relish the various single-barrel, highproof and limited-edition bottlings. And as America’s spirit, it makes a great gift, at diverse price points.

Raising the bar with extra age. With bourbon sales on fire, product line extensions
have proliferated. Among the most notable: Jim Beam Black, which just took home top honors—the“Bourbon Trophy”—at the International Wine & Spirits
Competition (IWSC). This 86 proof Jim Beam Black ages years longer in white oak barrels than original Jim Beam. It appeals to whiskey drinkers who are looking
to “trade up” and spend a little more on their bourbon. This expression demonstrates the impact of extra aging: a more advanced, complex bourbon experience—fullbodied, with smooth caramel and warm oak notes. 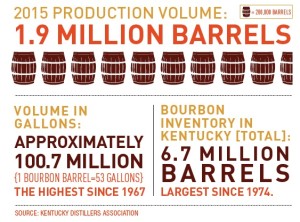 Deeply rooted in America’s bourbon tradition, Old Hickory Great American Whiskey delivers character reminiscent of Andrew Jackson, acclaimed U.S. President, General and Statesmen. “Old Hickory,” as Jackson was known, was a connoisseur of fine whiskey, and enjoyed his own blend from a distillery on the grounds of his Tennessee plantation home.