Back to Basics: Selling Chardonnay 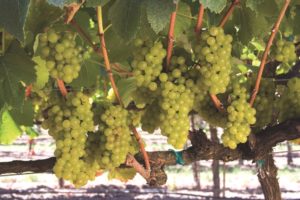 Chardonnay grapes yield the most popular selling wine in the U.S.

While there is some debate over what is the king of red winegrapes (Cabernet? Nebbiolo?), Chardonnay is the undisputed queen of whites. The most widely planted winegrape in California, it is also clearly the most popular wine in the U.S., with sales increasing every year.

People love Chardonnay because it is generous—full of fruit and then some. It is sometimes called a winemaker’s grape because it is so moldable; treatment in the vineyard, during fermentation and barrel-aging can dramatically impact style. Which is all the more reason to take a look at what makes this popular wine tick.

1680s: The first mention of Chardonnay was in the Mâconnais, where “Chardonnet” was said to make the best wine. It takes its modern spelling from a Mâconnais village named Chardonnay (population 162) near Uchizy.

1936: The first varietal labeled Chardonnay in the U.S. was released. This shift represented a fundamental  distinction, affirming that New World wines were based on the grape, while Old World wines still defined themselves as a product of place first.

1976: Chateau Montelena becomes the most famous Chardonnay in American history by besting a field of French and California Chardonnays in the “Judgment of Paris” tasting.

1980s: It was not until the 80s that Chardonnay overtook Chenin Blanc as America’s most popular wine – not just white white – from California. Chardonnay has been No. 1 ever since.

1990s: Chardonnay wasn’t necessarily considered a luxury wine until the 1990s. A turning point was the film “Disclosure,” in which Demi Moore seduces Michael Douglas with a bottle of high end Napa Valley Chardonnay (1991 Pahlmeyer).

Chardonnay is both flexible and generous; indeed, one of its strengths is its recognizable, embraceable flavors, which can manifest in distinct ways. Fruit can fall into several camps; depending on ripeness when picked and type of fermentation, flavors can be: Crisp and tart (green apple, lemon, grapefruit), stone/tree-fruity (peach, red apple, pear), tropical (banana, coconut, guava).

Then if the wine has been put through malolactic fermentation and aged in oak barrels, a whole other layer of aromatics and flavor elements come into play; think butter, oak, yeast, vanilla, caramel, toasted marshmallow.

What makes a wine taste buttery?

If a Chardonnay smells and tastes like butter, it’s no wonder. Diacetyl, a chemical that gives butter its flavor, is a natural wine byproduct resulting from a technique called “malolactic fermentation,” or “malo” for short. This technique can be applied to both white and red wines, but you don’t notice it in the reds, and it is expressed vividly in Chardonnay.

What makes a wine taste oaky?

Just as with whiskey and Cognac, some flavors in wine come from the wooden barrels it ages in. Vanilla, coconut, toast—these are all flavors of wood. A generation ago the only way to add those flavors was to use new wooden barrels, but those are expensive. Today, for cheap wines many big wineries soak a teabag of oak chips, or use wooden staves in stainless steel tanks. It does the trick for less.

Not surprisingly, given Burgundy’s marginal climate, it is widely agreed that the best Chardonnays come from cool climates, so it’s worth knowing the locations of cool regions in generally warm countries. For example, Monterey and the Sonoma Coast are cooler than Napa Valley and yield excellent Chardonnay.

Chardonnay, being both flexible and expressive, lends itself well to clues on the back label about how it tastes.

Chardonnay is both super-cool and super-uncool at the same time. Here’s how to sell to both the younger crowd and the classic oak fans.