Imperial Stout, The Perfect Warmer for a Chilly Night

The story goes that in 1698, when Peter was in London during his grand tour, he tasted porter. No doubt he was possessed of a fine palate, and declared a fondness for the dark ale, encouraging British brewers to send the beer up the Baltic Sea to St. Petersburg posthaste. According to the tale, the first shipment went bad en route; it’s a voyage of 1,000 miles to the far eastern end of the Baltic, so it’s likely that happened.

What the British did next has a parallel in the legend of India pale ale: they brewed more of the porter but this time with more grain and more hops, and the resulting liquid was met with joy by the citizens of Russia. Thus was established a new trade, and a new drink that was welcomed throughout the cold Baltic nations: Russian imperial stout.

There’s a bit of confusion among beer historians as to the naming of this rich, complex dark beer. Porter is the predecessor of stout, and the term stout porter apparently didn’t become popular until the early to mid-1700s, but no mind. In the beginning it was all porter, and Russian Peter and his people got a powerful version of it, the perfect warmer for a chilly night. 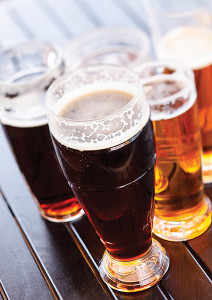 Nearly a century later, Empress Catherine the Great of Russia became a devotee of the beer style. A contemporary book, The History and Antiquities of the Parish of St Saviour, Southwark, spoke of the quality and global significance of the imperial stout produced by Thrale’s Anchor Brewery: “The reputation and enjoyment of Porter is by no means confined to England. As proof of the truth of this assertion, this house exports annually very large quantities; so far extended are its commercial connections that Thrale’s Intire [a name at the time for imperial stout] is well known, as a delicious beverage, from the frozen regions of Russia to the burning sands of Bengal and Sumatra. The Empress of All Russia is indeed so partial to Porter that she has ordered repeatedly very large quantities for her own drinking and that of her court.”

Imperial stout is much different than the dry stout poured from the tap by Guinness. It is dense, even viscous, and carries twice or more the level of alcohol. One recipe, recorded in 1851, has the ingredients listed as 63.6% pale malt, 23% brown malt, 10.8% amber malt and 2.6% roasted malt, and a hop rate of 9 lbs. per barrel, a huge amount. Still, imperial stout does not have a pronounced hop profile, because the grain side of things is so powerful.

As far as appearance goes, a Russian imperial stout will range from deep reddish brown to black, and generally features low head retention. The aroma can be varied and complex. Roast, maltiness, alcohol, hops and fruity esters all might be in evidence. Malt aromas can be slight or rich. Fruity esters can be low to strong, often presenting as the dark fruit character of raisins or prunes. Tones of coffee and dark chocolate are common. The bite of alcohol can be there but never should be sharp. Hop aroma tends not to be a factor.

In the mouth the body can be very full, velvety smooth and chewy, but not syrupy or too sweet. Warming alcohol should add to the overall quality of mouthfeel. Low to moderate carbonation is to be expected, and long conditioning times can decrease both the body and carbonation.

On the palate the beer is intense: roastiness, malt tones, hop bitterness/flavor and fruit esters, often with undertones of alcohol. Both hop bitterness and roasted grain flavors can run the scale from medium to quiet high. The roasted grains may show as bittersweet chocolate and/or coffee, along with the essence of burnt grain or tarriness.