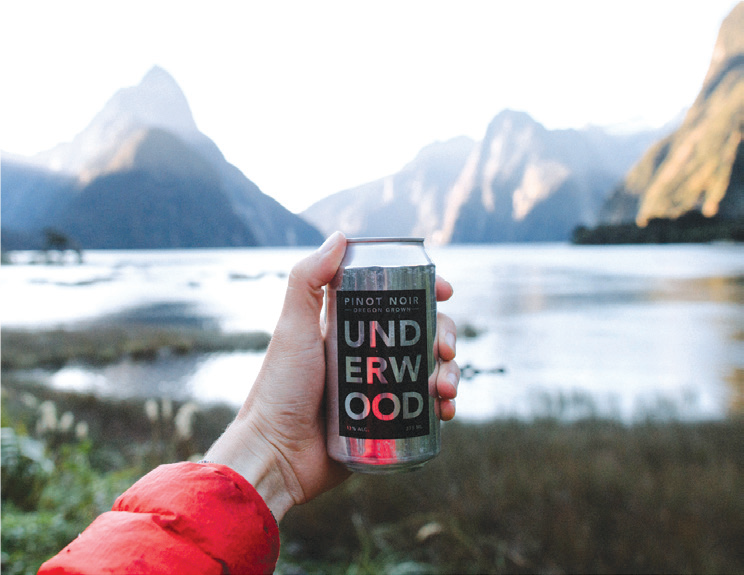 Canned wine isn’t just found on grocery store shelves and at outdoor festivals these days. Producers, consumers, and sellers are taking aluminum more seriously than ever as more premium juice makes its way into cans.

For years, canned wine was seen as a cheap alternative offering convenience in an attractive package, but recently, it appears that the same perception evolution that occurred with other alternative packaging innovations is happening with canned wine. As consumer demand for high-quality wine in cans increases, retailers and restaurants are figuring out how to best leverage their potential.

The category’s popularity is undeniable. Nielsen reported that off-premise sales of canned wine in 2019 grew 79.2 percent for the 52-week period ending December 28, 2019. In comparison, during the same period, overall off-premise wine sales increased just 1.4 percent year-over-year. Canned wines racked up over $80 million in sales last year, according to Nielsen.

The market is currently dominated by a few brands—notably Precept Wine’s House Wine and Union Wine Co.’s Underwood—but bigger players like E&J Gallo, The Wine Group, and Constellation are now aggressively in the game. Even beer behemoths are betting on canned wine; AB InBev snapped up Babe Wine in 2019, and  partnered with the NFL as an official sponsor.

Babe was born in a can, but the bigger story may be established fine wine producers embracing cans. Francis Ford Coppola Winery was the first to popularize the format with the launch of Sofia in the early 2000s, and put its premium Diamond line in cans a decade later.

The big spike in new entrants is even more recent: The number of producers canning wine grew 180 percent (from 125 to 350) between June 2018 and June 2019, according to wine-in-a-can research firm, WIC Research (WIC).

If there remained any question as to the quality of canned offerings, in a blind taste test conducted by WIC last year, the difference in taste between canned and bottled wine was statistically negligible.

In terms of the market’s direction, WIC’s partner and co-founder Robert L. Williams Jr., Ph.D. predicts that the momentum is leaning toward the luxury end of the wine market: “More premium wines will continue to get canned as the market grows and competition increases.”

Two producers that saw the growing importance of putting quality wine inside the can were Union Wine Co. in Oregon, and Alloy Wine Works in Paso Robles, which launched premium wine in cans in 2013 and 2014 respectively. Together, they were responsible for much of the category’s growth between 2013 and 2016.

“It was about meeting people where they wanted to be,” says Alloy’s founder Andrew Jones, who sold the company to Vintage Wine Estates last year but remains on board. “They wanted top-quality, terroir-driven grapes, treated the same way they would be for the bottle, but in a smaller, endlessly recyclable package that could be consumed anywhere.” Jones continues to make several canned wines under his Field Recordings label.

In 2015, Sans Wine Co. began sourcing organically farmed grapes from the Napa Valley and putting them in a can. “Our cans are vintage-dated and sourced from a single vineyard,” co-founder Gina Schober explains. “No one else was specifying AVAs, vintages, and vineyards, but we knew there was a market for that.”

While the original base-level offerings retail for an above-average $10 per can, Sans now produces a $12 Carbonic Carignan, $15 Dry Riesling, and a $25 Cabernet Sauvignon.  Sans Wine Co. now produces 5,000 24-can cases annually.

“Our philosophy is to treat the grapes as we would if they were going in the bottle,” co-founder Jake Stover says. “Our interaction with them is minimal.” Also filling the organic canned wine void: Château Maris has canned organic Pinot Noir in the South of France since 2015; Winesellers Ltd.  started canning Tiamo in Italy in 2017; California’s Bonterra added cans in 2018.

As the aluminum-packaged wine supply ramps up, the logical question is how they will be consumed. “From a hospitality standpoint, finding a way to create premium wines that were immediately accessible seemed like a no-brainer,” says Thomas Pastuszak, the wine director at New York City’s NoMad, who created Vinny in 2018, with the goal of creating a premium wine in a can. He contracts with small farms in New York State to create a sparkling white and a sparkling rosé, which retail at $20 for a four-pack (250ml)—and of course, the cans are part of the James Beard Award-winning bar program at NoMad Bar.

Outdoor enjoyment is a very conscious mode of use. Sean Larkin, the founder of hand-farmed Larkin Wines in Napa Valley, was inspired by the no-glass policy at the beach; he now offers white, red, and rosé cans—packaged confidently as LARKAN—at $144 for a 12-pack (375ml).

Some point to the increasing awareness of sustainability and wellness as fertile selling points for premium canned wine. “A single-serve can eliminate the bottle left unfinished at the end of the night,” says Marian Leitner, the founder of Archer Roose. She adds that aluminum can be recycled and reused indefinitely: “Our cans are back on shelves within 60 days of being recycled.” The global recycling rate for glass is only around 26.5 percent, while the global recycling rate for cans is 69 percent.

Brett Vankoski, the co-founder and wine director of Latitude Beverage Co., owner of premium sparkling Italian cans dubbed Lila, notes: “As an industry we need to find ways to address how smaller formats like cans, especially ones with premium juice, can be a healthier alternative.”

Even established fine wine importers and distributors are recognizing cans’ value and potential. “I did not think canned wine could be serious, terroir-driven, or varietally true,” says Arjun Dewan, the executive vice president at New York-based importer and distributor Winebow. But in 2017, Winebow began working with Bridge Lane Wine, the second label of Long Island’s Lieb Cellars, which specializes in bottles, kegs, and bag-in-box. The five styles of 375ml cans ($34/four-pack) changed Dewan’s mind.

The Winebow team launched their own line of premium canned Provençal rosé, Amble + Chase, in 2018, which retails for about $5 a can (250ml). In March, Winebow also became the New York distributor for Underwood, which now represents six of the top 15 SKUs in Winebow’s Oregon super-premium category—including wine in bottle.

“Cans are not a fad, they are the future,” believes Rob McMillan, the founder of the Silicon Valley Bank’s Wine Division, who authors the bank’s annual State of the Wine Industry report. “I have long been a naysayer for canned wine, because I think about how I like to consume fine wine, but ignoring cans as a segment means ignoring an on-ramp for younger consumers. The smaller servings also make it possible for all consumers to try better wines for a lower price.” Offering newer drinkers the opportunity to explore higher quality, competitively priced cans is essential to the continued growth of the category, he believes.