Hope for Connecticut’s Hospitality Industry on the Horizon 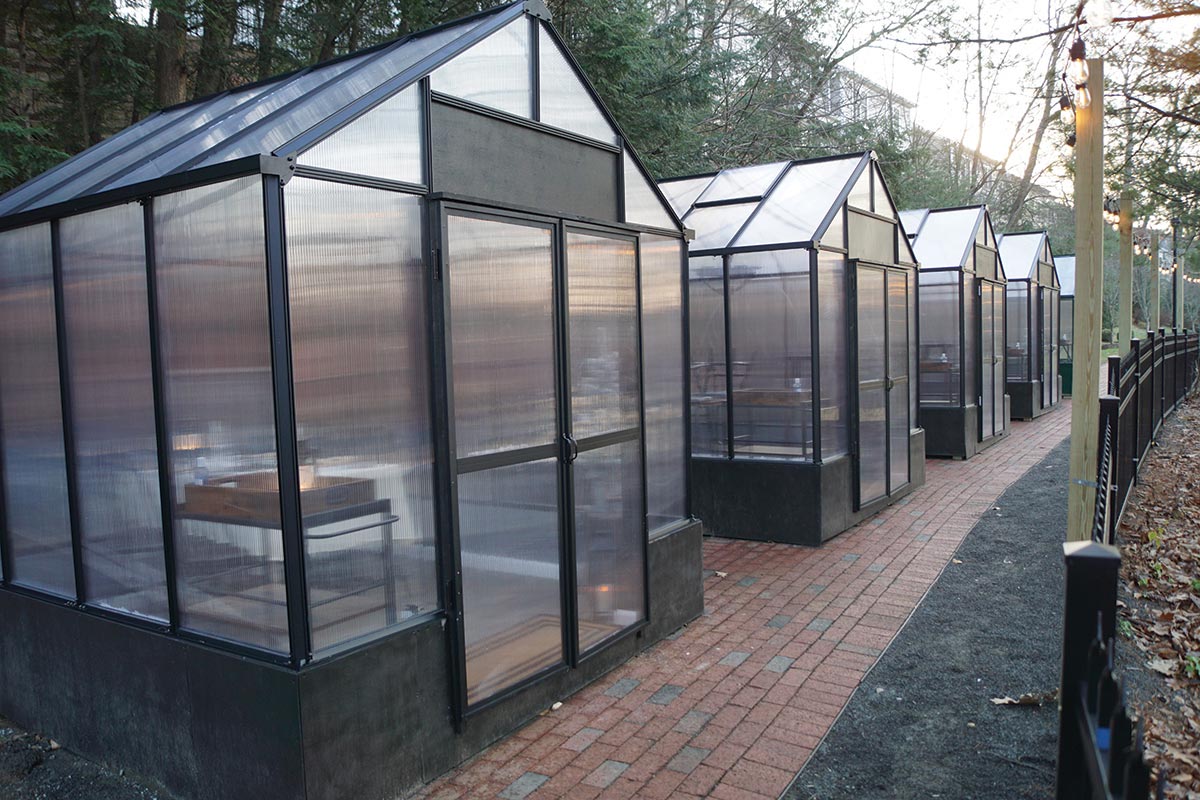 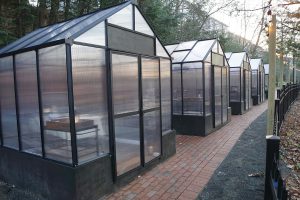 Millwright’s in Simsbury continued to innovate safe dining options through its Outside at Millwright’s custom-built dining greenhouses and “bridge pods,” with views of the waterfall. Gaining consumer confidence is core to the sector’s recovery, in addition to state and federal policy and relief efforts.

COVID-19 case numbers decreased in late January and early February, averaging around a 3.58% positivity rate as of press time, renewing hope for better business days ahead for the Connecticut hospitality industry. The rollout of vaccines also continued, as the state’s Phase 1b progressed and scheduling information for frontline essential workers – including food service and restaurant workers – was expected to be made available in early March.

With a decrease in case numbers, the state saw some restrictions lift within the on-premise sector’s daily operations. Gov. Ned Lamont changed the state’s business curfew to 11 p.m. from its earlier mandate of 10 p.m., effective on Feb. 2. Other restrictions on dining capacity and the continued closure of bar seating remained in place as of press time. The Connecticut Restaurant Association (CRA) continued to advocate for restaurant owners, with Executive Director Scott Dolch asking government leaders to drop the curfews altogether, since bordering states Massachusetts and Rhode Island ended their mandated early closing times at the end of January.

“We are appreciative of the Governor’s effort to move back the curfew to 11 p.m. and we are also working hard to push for increases in capacity, table sizes and most importantly event size numbers, similar to other neighboring states,” Dolch said in a Feb. 6 email message to CRA members. The trade association is also lobbying for the continued expansion of outdoor-dining rules put in place via an executive order in May 2020, which has allowed venues to expand their outdoor-dining spaces to seat more guests outside in a safe, socially distanced manner.

Dolch also testified in support of Section 59 of House Bill 6101. The law would be in place for three years after its passage, allowing restaurants to continue to sell to-go alcohol in sealed containers with food takeout orders beyond the time frame originally laid out in Gov. Lamont’s executive order. Dolch gave testimony in support of the bill at a virtual public hearing for the General Law Committee on Feb. 4. The measure has helped bring in some additional restaurant sales during the pandemic and will continue to remain important to venues as they rely on takeout for a large amount of their sales.

“As this industry slowly begins to recover in 2021, restaurants will continue to remain dependent on takeout sales for the foreseeable future,” Dolch said during his testimony. “Alcohol to-go provides a much-needed revenue stream to an industry already struggling with reduced profit margins. Forward-thinking smart policy ideas such as this are exactly what the industry needs to keep our doors open. While this may seem like a small change, I assure you that every small change matters to our industry right now. For most local restaurants, the line between staying in business and people employed and losing their business forever is razor thin.”

Nonprofit clubs, golf clubs and other venues holding café liquor permits received an extension of their liquor renewal permits through an executive order issued by Gov. Lamont on Feb. 4. Permittees will have until April 20 to pay their renewal fees. Permit renewals were originally due on Feb. 9. The renewal fee has increased to $2,000 and permittees are required to pay for their licenses in incrementally higher amounts over the next four years until they reach the full $2,000. The Connecticut Legislature created a fee step schedule for café liquor permits. In the first year, the renewal fee is $800; in the second year, it’s $1,200; in the third year, it’s $1,600; and in the fourth year, the fee is $2,000.

Beginning in mid-January, businesses were able to apply for the second round of Paycheck Protection Program (PPP) loans, made available through the $900 billion federal pandemic relief package, which was signed into law as part of the $2.3 trillion federal stimulus bill on Dec. 27, 2020. A total of $284 billion is available to small businesses, nonprofits and local news organizations across the country and the funds are tax deductible. More than 11,000 small businesses in the state had accessed over $1 billion in PPP loans during the second round of funding, as of early February, according to the Connecticut Business & Industry Association.

Through The Relief Act, businesses who qualify will be able to receive both PPP loan funding and enhanced benefits through the employee retention tax credit (ERTC), a refundable tax credit against employment taxes, including Social Security and Medicare, of qualified wages an employer pays to its employees. In 2021, the ERTC covers up to 70% of eligible wages paid by the employer, with a total credit of up to $14,000 per employee. These benefits through The Relief Act extend until June 30.

Upon taking office, President Joseph Biden’s administration began working to pass its $1.9 trillion COVID relief bill, the American Rescue Plan, the details of which were announced on Jan. 15. While more relief for the hospitality industry was promised through the bill, other aspects of the bill, including its Raise the Wage Act – which would require states to increase their minimum wage incrementally until reaching $15 per hour while eliminating the tip credit – were concerning to industry members.

“The Raise the Wage Act imposes an impossible challenge for the restaurant industry,” said Sean Kennedy, Executive Vice President of Public Affairs, National Restaurant Association, in a statement. “While other businesses on Main Street are starting to see a recovery, restaurants across the country are struggling to stay open amidst indoor dining bans or limits that have been in place for ten months … Our industry runs on a 3-5% pre-tax profit margin in a good year – during a pandemic is not the time to impose a triple-digit increase in labor costs. Far too many restaurants will respond by laying off even more workers or closing their doors for good … A nationwide increase in the minimum wage will create insurmountable costs for many operators in states where restaurant jobs are most needed for recovery.

The elimination of the tip credit will cut the take-home wages of thousands of tipped employees who make far above the proposed minimum hourly wage. These skilled hospitality professionals generally earn between $19-25 per hour and have made clear many times before that they support a tipped minimum wage.”

More direct payments, totaling $1,400 per individual, are currently planned for people with incomes of less than $75,000 per year through the latest relief bill. On Feb. 4, the latest version of the RESTAURANTS Act, which would designate approximately $25 billion to restaurant funding, was passed by the Senate. The bill was passed on Feb. 10, with incremental increases in the minimum wage expected to begin in January 2022.

In January, the CRA launched its CT Restaurant Relief Fund, which will provide grants of up to $5,000 to Connecticut restaurants in need as they continue to cope with business effects brought on by the COVID-19 pandemic. The fund was kicked off by a donation of $500,000 from delivery service company DoorDash and will be supplemented with fundraising and private donations. Available through DoorDash’s Main Street Strong Pledge, eligible restaurants who apply will each receive a one-time $5,000 grant to be used for operating expenses including rent, payroll, the purchase of PPE and outdoor-dining equipment.

“Thank you to DoorDash for providing $500,000 to our foundation to help us launch the CT Restaurant Relief Fund, which will provide up to $5,000 grants to some of the hardest hit restaurants around the state,” the CRA said in a statement. “We look forward to growing this Fund, so we can help as many local businesses as possible.” The CT Restaurant Relief Fund is also accepting donations in addition to the DoorDash donation.

To be eligible, restaurants must be open and located in Connecticut and must have experienced a sales loss of at least 25% in 2020 compared to 2019. Applications were accepted through Feb. 5. Restaurants were notified of funding availability by March 1, with grants planned for receipt by early May.

Uber Eats announced its own Restaurant Grant Program in February. Through the $4.5 million Restaurant Grant Program administered through Local Initiatives Support Corporation, qualifying restaurants will receive one-time grants of $5,000 to pay for necessities including rent, payroll, debts to vendors, expenses for technological upgrades and other operational costs. The grant program is part of Uber Eat’s Local Support Effort, which will provide more than $20 million in support to the industry over the next six months. To be eligible, restaurants must be Uber Eats or Postmates restaurant partners, have fewer than five locations and a maximum of 50 employees per location.