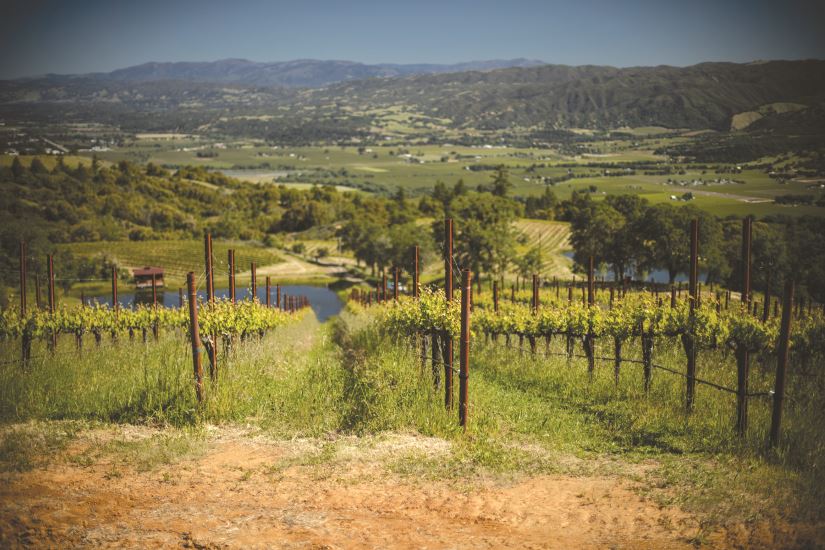 With Interest Up But Knowledge Sparse, Retailers Keep It Simple When Promoting Organic

Big picture: Americans are buying more products perceived as healthy. Sales of organic foods in the U.S. doubled between 2008 and 2016, and organic milk now makes up 5% of the total milk market even though it costs doublethe price of conventional milk. But is “green” awareness impacting alcohol the way it is mainstream foods and beverages? We talked with retailers around the country to see how they sell “green” wine.

The Big ‘O’
One issue came up consistently: the word “organic” is far more powerful than “biodynamic” or “sustainable.” Wine shoppers are generally unaware of actual designations—let alone certifications. For most customers, though, “organic” is a catch-all term.

Frank Pagliaro, owner of Franks Wine in Wilmington, Delaware, says, “Most people don’t know what sustainable wine even means, or biodynamic for that matter. I bet a lot of retailers don’t either!”

For the record, sustainable is the least explicit and stringent level, biodynamic the most. Wine can be certified organic (meaning no added sulfites, and certified outside the U.S.); but “made from organically grown grapes” is the standard language for American-made certified wines. 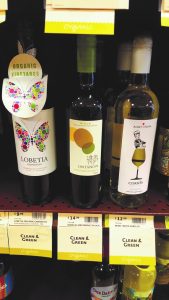 Point-of-sale “greenery” abounds, as evidenced by shelf talkers and neckers on display at a Pennsylvania Fine Wine and Good Spirits store. Many independents use handwritten signage, color-coded stickers or ladybug symbols to indicate green wines.

Peter Granoff MS, a partner at Ferry Plaza Wine Merchant in San Francisco, was one of several retailers who said they are proactive in terms of screening the steady flow of green claims; he will not list wines as “sustainable” if they don’t have certification of some kind.

Similarly, most retailers are conscientious about listing the correct type of certification, in-store and on their website; and they are aware that signage is even more important when intermingling green wines among others based on varietal or region.

Many, like Locke Store in Millwood, VA, use a coding system. Owner Juliet Mackay-Smith explains, “There are three different color dots on my labels that designate sustainable, organic, biodynamic. If it’s designated organic, that’s certified organic. If I know it’s organic and it’s not certified, I don’t put on the dot for organic.” Mackay-Smith does still stock wines she knows to be positively green, albeit uncertified: “I have a lot of repeat customers and when I tell them it’s organic, even if it’s not certified, they’ll trust it,” she adds.

All in Good Time

Retailers who cultivate their selection of green wines are finding that their efforts are rewarded. “For about five years, we’ve had people interested in organic and sustainable farming,” says Michael Bray, owner of Passion Vines in Somers Point, NJ. “We’ve cultivated that customer. We do a lot of in-store events where we show only organic wines.”

Some customers, particularly younger ones, are interested in “green wine” for philosophical reasons. But for others, health concerns drive them toward organic wine in particular. Sulfites, more than anything else, continue to be viewed as the main reason to buy organic for some customers. “Health issues are a definitely a factor, and one where unfortunately there remains much confusion and misinformation,” says Granoff. “There are still consumers out there who think that sulfites are only in wines sold in the U.S.”

Organic is an increasingly important selling point in the spirits world as well. One significant factor: While wine remains handicapped if not handcuffed by “made from organically grown grapes” mandatory phrasing, organic certification for spirits can be positioned front and center, and in turn be an important point of distinction on the shelf or back bar.

Point-of-sale “greenery” abounds, as evidenced by shelf talkers and neckers on display at a Pennsylvania Fine Wine and Good Spirits store. Many independents use handwritten signage, color-coded stickers or ladybug symbols to indicate green wines.

Several years ago, when Minnesota-based Prairie Vodka began touting its status as the #1 selling organic vodka, its sales went into triple-digit growth. In 2011, when organic American Harvest Vodka launched, it was perhaps a bit ahead of its time, says Bill Henderson, Chief Marketing Officer, The Beach Whiskey Company, which now owns and markets the brand, relaunched last year with the USDA Organic logo featured prominently on the label as well as the made-in- America identity.

“Today’s consumer places greater value on organic when buying spirits; it’s become an important point of distinction,” Henderson observes. “With the current redesigned bottle and label, we are purposefully transparent with regard to how American Harvest is made and where it is made.”

Words are still powerful; don’t be surprised if the government gets more involved. The legal industry authority Law 360 recently predicted that the U.S. Food and Drug Administration will sometime this year offer up regulatory guidance on the use of words like “healthy” and “natural” on packaging, which could have repercussions for wine, beer and spirits as well.