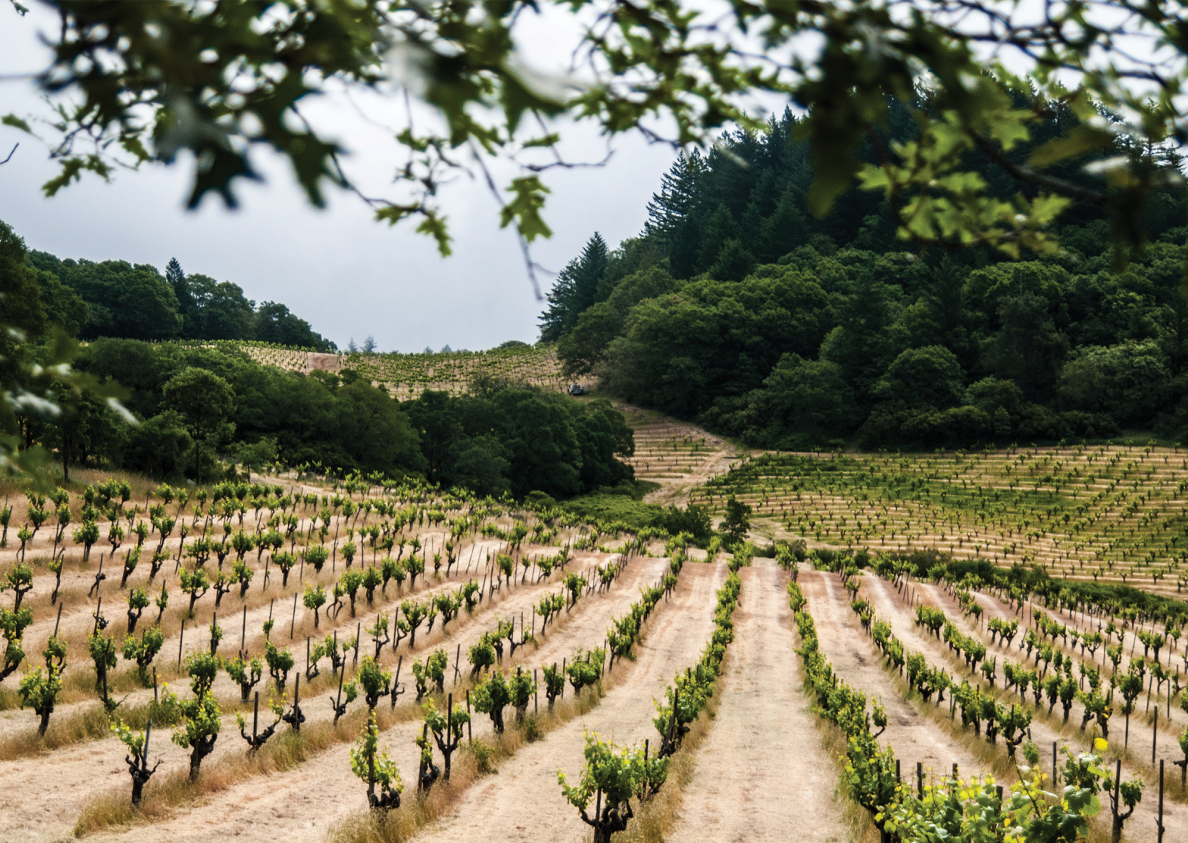 Changes In Philosophy, Farming, And Ownership Bring A Return To Freshness At Historic Napa Valley Wineries

When Heitz Cellars was purchased in 2018, fans held their collective breath. How would Gaylon Lawrence, an agriculture mogul from Arkansas, put his stamp on the winery which had been owned and run by Joe and Alice Heitz since they founded it in 1961?

Heitz is just one of several iconic Napa properties to change hands of late, raising the same questions and anxiety for many wine drinkers. But at Stony Hill and Mayacamas, as at Heitz, the new generation of owners seems to lean towards preserving not revamping these idiosyncratic wineries.

With an eye to an earlier era of winemaking, these icons are taking a leading role in bringing a classic, more balanced style back into prominence.

Heitz wines are legendary for their unique restraint, elegance and longevity. And the winery’s unusual (for Napa) cellar practices—notably avoiding malolactic fermentation for red wines, limited use of new oak, aging wines for years before release—will remain, assures Carlton McCoy, the estate’s newly appointed president/CEO and former wine director at The Little Nell in Aspen, Colorado. “I’m a restaurant guy, so I look at winemakers like chefs—they are the heart of the house,” says McCoy, who insisted on retaining Brittany Sherwood as head winemaker.

Carlton McCoy brings years of restaurant experience to his new role as president of Heitz Cellars.

McCoy believes Heitz’s distinctive identity is traced to a much earlier time. “I think to really understand Heitz Cellars, you have to go back many decades and look at the post-prohibition era of winemaking,” says McCoy. “By the 1970s Napa was already seeing more of the European influence; wineries had already started to make that turn into what we now know as modern.”

Heitz will narrow its portfolio to focus squarely on Cabernet Sauvignon. Other notable Heitz wines like their unusual Grignolino (a medium-bodied grape from Piedmont the estate has produced for decades) are not being abandoned; they’ll still be made, but under a different brand.

Classic style back in fashion

One of California’s earliest Chardonnay producers, Stony Hill Vineyard was purchased by Long Meadow Ranch in 2018. Stony Hill always aimed for a focused style with no malolactic fermentation and no new oak, and never veered from this course, even when it wasn’t fashionable.

“We actually never felt any pressure to change,” says Sarah McCrea, whose parents planted their first vines at Stony Hill in 1948. “Our philosophy was always, ‘We make the wine we love to drink.’” McCrea—who will be staying on as VP of marketing strategy—credits Stony Hill’s success to their loyal customer base and modest production size; there have always been enough people around who appreciate and buy their wines.

Despite a rollercoaster ride of ownership, practices at Mayacamas have stayed notably consistent in the cellar, and transition to organic is under way in the estate vineyards.

Long Meadow Ranch owner Ted Hall had been a fan of the Stony Hill style for over 30 years. “Ted knew exactly what makes Stony Hill tick and what our hillside does really well, and he wants to continue this tradition,” she explains.

Today, with more Chardonnay producers and drinkers embracing a less opulent style, Stony Hill is a growing part of that conversation. “It’s a wonderful feeling to think that what we do is appreciated and seen more in the world,” says McCrea. “I think it has definitely brought more attention to Stony Hill.”

Mayacamas Vineyards & Winery—which dates to 1889—has been through a bit of an ownership rollercoaster in since it was purchased in 2013 by Charles Banks and Jay Schottenstein. Banks is no longer a partner, having sold his stake in the winery after being convicted for fraud. (The money from the sale went to basketball star Tim Duncan, the victim of his fraud, as restitution.)

Despite the bumps, Mayacamas has doubled down on its old-school winemaking philosophy. “There’s a lot of old brands in Napa, but not all of them have that continuity of style,” says Braiden Albrecht, winemaker at Mayacamas. “In the cellar we’ve tried to keep the core in place. In our barrel cellar that means a lot of neutral wood, large format foudre, and concrete tanks. We really love those tanks but they were built in the ’50s, so we needed to resurface them and outfit them with glycol so we could utilize them more efficiently, with temperature control.”

Inglenook has ridden through highs and lows over the decades with numerous ownership changes and production volumes that ranged from tens of thousands of cases to several million. Francis Ford Coppola purchased the estate in 1975 and reclaimed the Inglenook brand name in 2011. After an era of chasing the more extracted style, director of winemaking Philippe Bascaules has restored Inglenook’s terroir-driven approach, by picking earlier and raising yields to slow ripening.

One of the few estates in Napa that can claim over 100 vintages, Inglenook is celebrating its 140th anniversary with a cellar revamp of its own: An installation of all-new fermentation tanks. “Having 120 tanks helps us increase our knowledge of the vineyard and each growing area,” says Bascaules, who trained under Paul Pontallier at Château Margaux. “We’ll have a lot of capacity to vinify and separate the grapes. All of the tanks will be automated, too, which will allow us to experiment with multiple pump-overs.”

Evolution in the Vineyard

Changes are underway in the vineyards, too. Newton was one of the first family-owned wineries to move into corporate hands when Moët-Hennessy purchased the winery in 2003. General Manager Jean-Baptiste Rivail credits Maggie Henriquez, president of the company’s Estates & Wines division, with staying true to Peter Newton’s vision to craft cooler-climate wines on Spring Mountain, a higher-elevation, wetter district. “We look to the future by defining the winery’s founding values: respect of nature, terroir, and a pursuit of a fresh style,” says Rivail. “That’s driven our transition to organics.”

Head of viticulture Mayacamas Olds has helped direct Newton’s $10 million investment in their vineyards. “We are introducing regenerative agriculture, using cover crops and goats to remove invasive plants,” Olds explains. “All things to make sure the soil has the most diversity.”

Mayacamas Vineyards and Stony Hill Vineyard are in the midst of transitioning to organic farming as well.

Historic estates are being forced to rethink traditional vineyard practices, particularly as climate change encroaches on Napa. McCoy says the richer style common around the turn of the millennium owes itself to French viticultural consultants, who focused on opening up the canopies and otherwise getting more sun and warmth on the vines—tactics that suit Bordeaux but not sunny Napa, especially today.

Many Napa growers are changing their trellising and row direction to moderate and balance ripeness rather than to simply encourage it.

At Larkmead Vineyards, with 125-year history of winegrowing, winemaker Dan Petroski—at the helm since 2006—has even begun to question the sacred assumption that Cabernet will always be king in Napa.

The estate recently planted a three-acre research block of other grape varieties that may represent the future of a warmer Napa Valley, including Chenin Blanc, Aglianico, Tempranillo, and Touriga Nacional. “I don’t necessarily believe that Napa Valley has to be aligned with Cabernet Sauvignon,” says Petroski, who hopes to see more Napa producers exploring other varieties: “We’re not still using an AOL to get on the internet or VHS to watch movies. We may not be drinking Cabernet from Napa Valley in 20 years.”

Both Larkmead and Newton experimented with the richer wines that Napa became known for. Yet today, both are changing course. “We are going back to Newton’s original more balanced style in the 1970s and ’80s when the wines were fresh and bright and could last decades,” says Rivail.

To achieve greater precision, Alberto Bianchi, who came on as Newton’s winemaker in 2016, has begun breaking down picking dates not just for specific blocks, but for portions of blocks, so each can be harvested at optimum freshness.

Petroski has been reducing alcohol levels at Larkmead, in an effort to fine tune the vineyard’s range and best expression. He says the danger with big wines is a loss of details: “When you play music really loud, it gets distorted, so you lose the nuances.”

With the volume dialed back, Napa’s diversity and terroir is coming through more prominently in the glass. “I think there is a reaction to the opulence of the cult era,” says Mayacamas’s Albrecht. “People are looking for a bit more of diversity from Napa. There are really a lot of different microclimates and soil types in the Valley and the beauty of these old estates is that you can really get a sense of place. That’s one of the things during the last 20 years that was maybe getting lost a little bit—and is now coming back.”