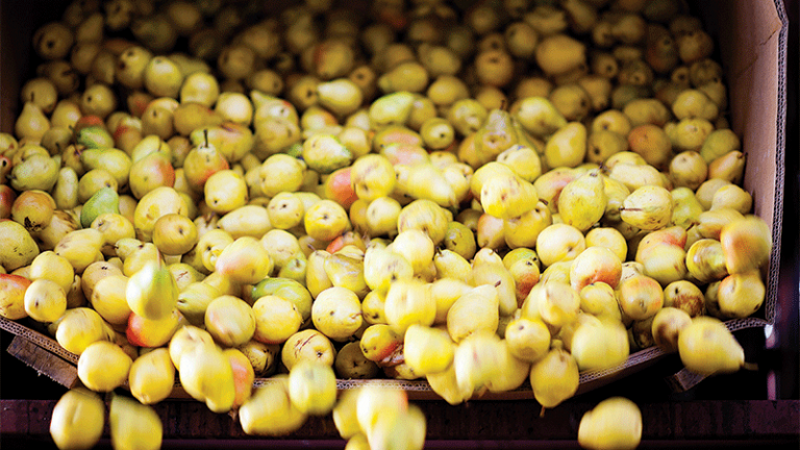 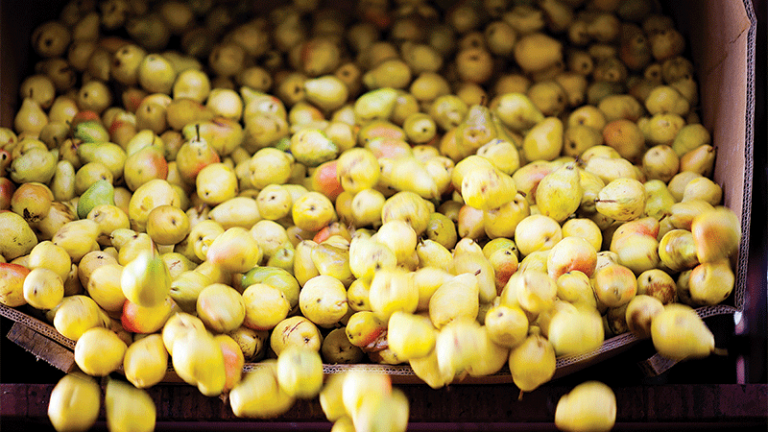 In central New Jersey, famed applejack maker Laird’s has been doubling production each fall for the past five years. Out in Indiana at Huber’s Starlight Distillery, new orchards have been planted and brandy production has been increased to accommodate booming sales of apple and peach brandies.

It’s not a universal story, but a number of American producers of fruit brandies have something to crow about as the cocktail renaissance finally seems to be getting around to the country’s first spirit.

No, not rum or bourbon or even moonshine—fruit brandy can claim to be the first spirit produced by European settlers in the New World. Wherever apples, pears and peaches grew, farm-level production sprung up. Staten Island was home to the first brandy distillation in the New World in 1640. George Washington distilled not only whiskey but also apple and peach brandies, the latter reserved as a gift to dignitaries and friends.

Post-Prohibition, however, fruit brandies lost their place at the table. Imported versions, notably French apple brandy Calvados seeped in, but never really made much of a dent. The return of pre-Prohibition cocktails like the Jack Rose and many colonial-era tipples, such as Fish House Punch which uses peach brandy, have helped stir some action. But we should not discount the modern maturity factor: producers making the effort to harvest orchards and laboriously distill tree fruits are taking their business quite seriously—and arguably making better brandy than previous generations. 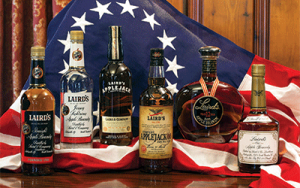 Laird’s, whose first commercial transaction was in 1780, has seen demand ebb and flow over the decades, but the current wave is showing real intensity. Lisa Laird Dunn, Vice President for the family-owned distiller, even notes that some of their products left the market or went into allocation in the last few years, notably the 100 proof apple brandy, because sales had such a quick upswing. Now all Laird’s products, including the bottled in bond version, will be back by the end of the year.

“There’s definitely a lot of buzz surrounding American fruit brandies,” says Laird. “Our hope is that it will break away from being a niche product. One of the biggest problems is shelf position. It’s a brandy, not a fruit-flavored brandy and the average consumer is a little confused about the distinction.” Laird says even some distributor reps are confused about the category; she thinks retailers should consider creating American brandy sections to help resolve confusion.

Lance Winters, Master Distiller at the acclaimed St. George’s Distillery, Alameda, California, says things have changed dramatically in the years he’s been making fruit spirits: “When I first started in 1996, we’d crush about 80,000 pounds of pears a year and sold about 85% of what we made in Europe. In the 2017 harvest, we crushed over half a million pounds of pears, and the domestic demand for our pear brandy has been so great that it’s all sold here in the United States. That’s been driven primarily by on-premise business as bartenders start to see real value in using flavor-forward fruit brandies to make delicious cocktails.” 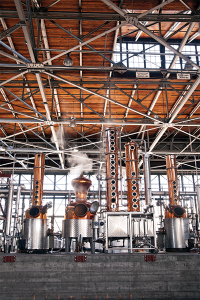 In Indiana, Ted Huber has been expanding brandy production over the last three years, and he credits bartenders as well: “Mixologists have done a great job bringing it out in front of people. Consistent exposure matters, which is why momentum has picked up over the last several years. Apple has taken off as our number one brandy selling product.” 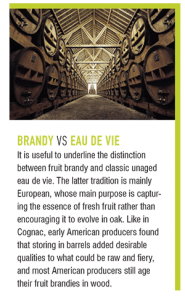 Growth, as might be expected from such a small category that depends on major urban cocktail markets, isn’t universal. Scott Harris, co-founder and GM of Catoctin Creek in Purcellville, Virginia, and his wife, distiller Becky Harris, have produced apple, peach and pear as well as grape brandies for nearly ten years but the company hasn’t seen much growth recently. “There’s a lot of education needed in the category.” He admits. “We spend so much time telling people justwhat fruit brandy is because they don’t really get the difference between brandy and liqueur.”

Meanwhile, the largest volume apple spirit, Calvados from Normandy, had a surprisingly bad year in 2017, according to Christine Cooney of Heavenly Spirits, who imports three brands. “There has been a bit of a rollercoaster ride but a general increase over the past 15 years, and then last year down quite a bit—it was a shock to all of us,” says Cooney. But she does expect a return to the longterm growth trend: “One of the best things you can do is to get feet on the ground and an ambassador in the market for the region.”

The Calvados Pays d’Auge designation (made by Heavenly Spirits’ Roger Groult and other widely respected brands like Drouhin) calls for pot stills and tends to be pricier, while the Domfrontais region and the overall Calvados AOC call for column stills that can produce a style less expensive and more easily accessible to novices.

Meanwhile, the latest episode of “As the Apple Turns” might well turn our attention to brand new locales of fruit brandy excellence. Craft distillers are making their mark with local fruit; examples include Harvest Spirits Farm Distillery, makers of Core applejack and peach brandy, in Upstate New York; Westford Hills in Connecticut makes mostly eaux-de-vie, but also an aged apple brandy; and Traverse City Whiskey Co. in Michigan has been turning local apples into brandy for the last few years, and aging it in bourbon barrels.

Winters’ patience has paid off, so much so that St. George Spirits is maxed out on fruit brandies. “Based both on our distilling bandwidth here and our ability to source fruit that meets our standards, we’re at capacity right now for our fruit brandies,” notes Winters. “Educating the trade and the consumer will always be the most important aspect of what we do.”