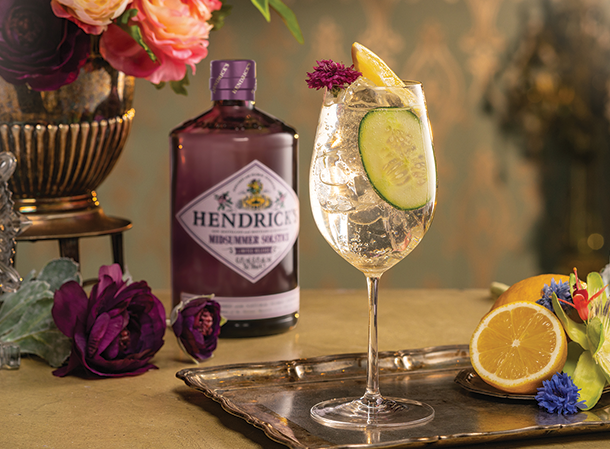 Hendrick’s Gin, widely credited with opening new botanical frontiers in the 1990s, released not one but two extensions this year, Orbium and Midsummer Solstice.

Modern Gin is now a worldwide phenomenon. Especially in America.

Ever since it emerged on the scene more than three centuries ago, gin, for all intents and purposes, has been identified as a quintessentially British spirit—or, at the very least, British by way of Dutch, thanks to the influence of the latter’s genever on the former’s iteration.

The most iconic brands—Beefeater, Gordon’s, Tanqueray, Bombay and their ilk—hail from either England or Scotland and tend to adhere to a “dry,” juniper-forward style with “London” in its very name. It wasn’t until the 1990s when Hendrick’s came along and pushed the boundaries on what the spirit could be that people and the industry really began to think differently about gin.

And two decades after that, gin has become about as untethered to a geographical place as it is to a singular style, becoming a spirit that truly belongs to the world. That’s thanks to a combination of factors: evolving drinking habits worldwide, the global craft spirits movement and, in no small part, the elevation of the dusty, old gin and tonic to a classy, stylish drink.

The industry has bartenders on the Iberian peninsula to thank for that last point. The Spanish “Gin-Tonic” (sans the ‘and’) emerged in stemmed, wide-mouthed goblet glass with fresh, innovative garnishes complementing the particular flavor profiles of the gin in the vessel. Gin culture exploded in Spain and Portugal and spread across Europe.

“What happened in Spain had more to do with the on-trade,” says Spiro Malandrakis, industry manager for alcoholic drinks at Euromonitor International. “Bars continued to move more and more toward premiumization, mixing [gin] with better mixers, adding a little flair to the actual cocktail ritual.” According to the market research firm, global on-premise gin revenue totaled nearly $9.4 billion, while off-premise sales topped $6 billion—a combined $15.4 billion—in 2017.

The active gin market has attracted an appropriate wave of new labels. It also helps that, unlike whiskey and other brown spirits that call for barrel-aging, gin is faster to market. “On the production side of things, the story is how these small-scale producers have popped up everywhere in a category that was sidelined,” Malandrakis says. With craft gin producers springing up on every populated continent, you might say the hottest trend in global gin is the explosion of new local-minded ones. Gin’s juniper mandate is proving to be like a bloodline that keeps the multi-generational family connected as it grows. Beyond juniper, botanicals are being gathered and infused as never before, not merely as points of distinction, but as genuine captures of terroir.

A decade ago the prevailing trend was to source pedigreed botanicals from all over the globe. Today the pendulum is swinging toward a mix of traditional (juniper, coriander, angelica root, citrus, Orris root, cardamom, licorice, cassia, cinnamon) and local botanicals.

Consider Germany’s Black Forest, a region best known for schnapps production, with more than 10,000 mostly minuscule farm-based producers turning surplus fruit into brandy. But, since 2006 it’s become home to a gin brand that has built a sizeable cult following: Monkey 47. The 47 is the staggering number of botanicals the spirit contains, a third of which come from the Black Forest itself, including angelica root, acacia flowers, bramble leaves, lingonberries and spruce shoots.

The gin bug has crossed the Pacific as well. Two years ago, global spirits giant Beam Suntory launched Roku Japanese gin—“roku” meaning “six,” a nod to the number of Japanese botanicals in the brand, which are combined with eight traditional ones. “The Japanese botanicals—Sakura flower, Sakura leaf, yuzu peel, sencha tea, gyokuro tea and sansho pepper—are harvested in accordance of ‘shun,’ the tradition of enjoying each ingredient at its best by only harvesting at its peak of flavor and perfection,” says Marilyn Chen, Brand Manager for House of Suntory. A selection of different pot stills are then chosen to ensure the best flavor is extracted from each botanical.” Chen says the result is a “complex, yet harmonious gin” with a smooth, silky texture.

Global start-ups aside, we need not worry about England or Scotland being left behind. Among the notable UK-based brands launched this century: Bulldog, the first gin infused with poppy and dragon eye (related to lychee). Others popping up to reinforce the U.K.’s spiritual claim to gin importance: Brockmans, Cotswolds, Fifty Pounds, Portobello Road and Carounn. The Botanist Gin, launched in 2010 by the whiskymaker Bruichladdich, features 31 botanicals—nine traditional ones plus 22 that are foraged on the island of Islay in the Inner Hebrides of Scotland.

On top of myriad botanical combinations, gin makers are tinkering with unusual distilling and finishing techniques. In Finland, Kyrö Distillery makes two rye-based gins, both including some botanicals foraged from local forests. Their American-oak-matured Koskue typically accounts for 10 to 20% of Kyrö’s gin sales, but in the U.S. it’s more of a 50-50 split, notes Head Distiller Kalle Valkonen: “The barrel-aged product, really seems to fit your palate on that side of the Atlantic.” Barrel-aging is picking up advocates, such as FEW and Koval in Chicago; Bluecoat (PA) and Tom’s Town (Kansas City). Big Gin (Washington State) uses bourbon barrels. In California, Benham’s and No. 209 both batch gins in ex-varietal wine barrels.

As with botanical recipes and wood-finishing, distillation techniques can provide interesting selling points. Many distillers boast of vapor infusion; others. infuse before and/or after distillation. Hepple Gin, and English gin launched in 2015, uses a threefold process for extracting botanical flavors: heavier ones are distilled with the grain, lighter examples are vacuum distilled, and juniper is extracted using carbon dioxide.

With Euromonitor predicting robust growth of 5% CAGR, vaulting annual U.S. sales from $15.4 billion in 2017 to nearly $20 billion by the end of 2022, the “new normal” in the gin market presents some novel challenges for bars and retailers alike.

Fortunately, gin does have some natural hooks on which re-sellers can hang their hats. In some cases, a stand-out botanical can become a simple selling point. Like citrus? Malfy, from Italy’s Adriatic Coast, has two lovely citrus-forward gins, one lemon, another blood orange. New Sipsmith Lemon Drizzle incorporates sun-dried lemon peels, lemon verbena and “vapour-infused fresh hand peeled lemon,” leaving no doubt as to its citric intentions. Brockmans showcases blueberry; Carounn has apple; Puerto de Indias and Beefeater Pink lead with strawberry. With the simplicity of an “alpha” botanical comes the simplicity of usage: using a signature botanical as a garnish often makes a naturally copacetic Gin & Tonic.

Gin points of distinction go even further than botanical and origin. O.R.E 118 is the first raw vegan Gin. Prairie and Farmer’s gins are both made in America and organic. Tanqueray Malacca and Fords Gin both lay claim to being “bartender’s gin.” Pink gins (in addition to the strawberry-tinged Beefeater Pink and Puerto de Indias) include Gin Lane 1751, Wölffer Estate and The Bitter Truth.

Gin’s globalization accelerating, plus a vibrant craft gin movement here in the U.S., but don’t be surprised to see an ancient type of gin join the party. Genever (pronounced juh-NEE-vuhr) remains the largest spirit category in the Netherlands and Belgium, might best be thought of as the “O.G.” (“Original Gangsta”) gin. Used in Medieval times for supposed medicinal benefits, genever by the 17th century was one of Europe’s largest exports; recipe books from the 1880s show that about one quarter of U.S. cocktails were based on the spirit.

Genever all but disappeared from the world stage following the two World Wars and Prohibition. But today, genever is in the midst of a three-year U.S. marketing campaign, keyed by five genever brands (Bobby’s-Notaris, Bols, deBorgen, Rutte and Smeets).

Genever’s main distinction, being distilled from malted grain mash and often aged in oak casks, lends itself easily to being positioned as “the missing link between Gin and whiskey,” notes Sandie van Doorne of Bols International. She asserts that genever’s character—“smooth and malty with a botanical finish”—makes a great alternative in cocktails such as the Collins and the Martinez. Bols has carved out a special cocktail niche for the Red Light Negroni—Bols Genever, Campari and sweet vermouth, served in glasses shaped like inverted light bulbs.