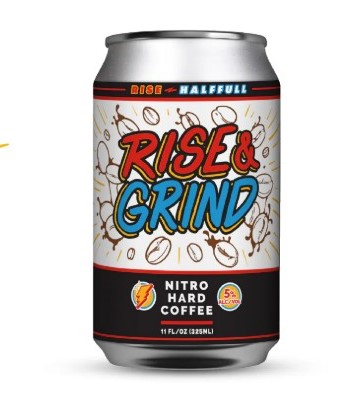 Stamford-based Half Full Brewery released new Rise & Grind Nitro Hard Coffee, which represents the first non-beer product it has released commercially. A collaboration with RISE Brewing Co., a Stamford-based nitro cold brew coffee producer, Rise & Grind is the first and only nitro hard coffee available on the market. Rise & Grind is made from organic coffee and malt, contains 90mg of caffeine per 11-ounce can and boasts a 5% ABV. Rise & Grind has no added alcohol and contains only naturally occurring alcohol created from the fermentation process. Dairy-free with no sugar added, Rise & Grind is coffee with a kick and Half Full Brewery’s first expansion into “non-beer” products. Rise & Grind is currently available for purchase in 4-packs of 11-ounce cans at the brewery in Stamford, and will soon be distributed throughout Connecticut.