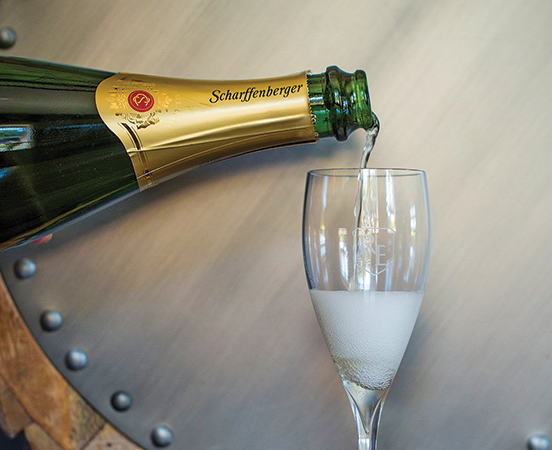 As stores prepare to stack up cases of sparkling wine for the holiday season, U.S. bubbly producers are rubbing their hands with glee.

Even without a competitive boost from the U.S.-E.U. trade war—sparkling wines are exempt from tariffs imposed in October—the market for U.S.-produced sparkling wine has never been better. Some of this is the rising tide of bubbles in general. Sales of all sparkling wines in the U.S. rose 5.6% by volume and 9.6% by value between 2014-2018. The U.S. now spends more money on sparkling wine than any other country—25% more than France, which is second—and is third in the world in consumption by volume, after Germany and Italy, according to IWSR Drinks Market Analysis.

But even in this sparkling market, the growth in American bubblies stands out. “The domestic portion of the sparkling wine market is one of the fastest growing slices of the market,” says Schramsberg vintner Hugh Davies. “It is exciting. It’s not that people are celebrating more. Sometimes they’re just drinking sparkling wine because they like how it tastes.”

In recent years at industry forums, speakers have tended to dismiss rising sparkling wine sales as a by-product of a boom in Prosecco. But now, some of Prosecco’s early adopters among consumers are looking to move up.

“More people are drinking sparkling wine every day,” says Enore Ceola, CEO and Managing Director of Freixenet Mionetto USA (which also owns Gloria Ferrer). “They’re looking for what’s next. What’s next after Prosecco? If you’re not ready to jump to Champagne, the next level is quality sparkling wine from California. Many producers from Sonoma [County] can provide a high-quality wine on the level of Champagne for half the price.”

Indeed, many of the fastest-growing U.S. bubblies are priced in the sweet spot between $15 and $30—right in between Prosecco and Champagne. Gruet Brut sales rose 21.7% between August 2018 and 2019, the highest growth rate of U.S. sparkling wines over $15, according to Nielsen. Gruet Brut Rosé was second at 19.8%.

“You have your Prosecco that’s $10 or $12. You have Champagne that starts at the $30 price point. And Gruet slots in right between that,” says Brad Mayer, Senior Vice President of producer and marketer Precept Wine. “Where American sparkling wine is finding its cadence is in that price point. I think when American sparkling wine starts to be too pricey and starts to compete more directly with Champagne, that’s when it becomes a more difficult battle.”

American bubbly isn’t just succeeding on price, though. California, and also Oregon in its new warmer climate, have developed a taste profile that seems to fit American drinkers even better than Champagne.

“The depth of fruit and the essence of fruit in California is pretty darn exciting,” says Schramsberg’s Davies. “At the end of the day, the essence of fruit from Pinot Noir that you get from coastal areas of California is really exciting. That’s not to say anything negative about Champagne. But it’s pretty exciting to taste all this fruit. We’re only making 11% alcohol base wines. They’re not that ripe.”

Ready for a Fundamental Shift?

Indeed, it’s possible that U.S. sparkling wine might be on the cusp of a Napa Cab-like moment. In the 1980s, much Napa Valley Cabernet Sauvignon was made more like Bordeaux and had an inferiority complex. (Indeed, the whole Meritage category sprang from this dialectic of modeling after Bordeaux but wanting to break free.) In the 1990s, first vintners and then consumers began considering the possibility that while stylistically it was different from Bordeaux, fruit-forward Napa Cabernet might be equal or even better than Bordeaux for their personal taste. The Napa Cab market took off and has never looked back.

The time is nearly (dare we say it) ripe for a similar reconsideration of the taste profile of California and Oregon sparkling wine.

“I don’t think anybody in the California sparkling wine industry is singing the blues about sales,” says Eileen Crane, CEO and founding winemaker of Domaine Carneros. “We’re always busy at the chateau. We occasionally have to turn people away.”