Labor Shortage May Be Making a Comeback for Restaurants 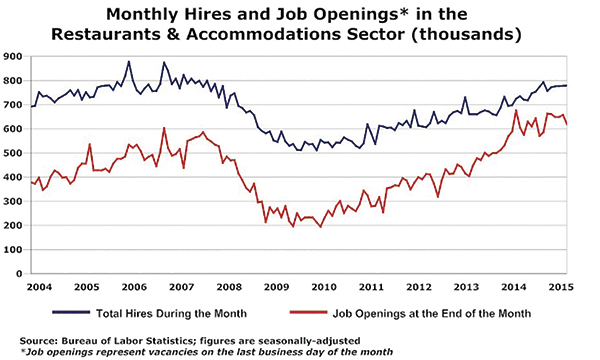 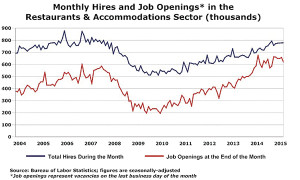 Restaurants added more than 1.8 million jobs since the end of the recession, and the expectation is for continued growth in the months ahead, according to the National Restaurant Association. However, there are indications that job vacancies are becoming more difficult to fill, according to the NRA’s chief economist Bruce Grindy in his latest Economist’s Notebook.

“The restaurant industry closed out the summer with a solid month of job growth, according to preliminary figures from the Bureau of Labor Statistics (BLS).” End-of-month job openings in the hospitality sector averaged 650,000 during the first half of 2015, which represented an increase of nearly 70,000 job openings over the first half of 2014. This year marks the fourth straight year with employment gains of “at least 3.5 percent … [but] there are indications that job vacancies are becoming more difficult to fill.” Grindy wrote “many restaurant operators are experiencing the double-edged sword of stronger customer traffic and a shrinking labor pool that comes with an improving economy and job market.”