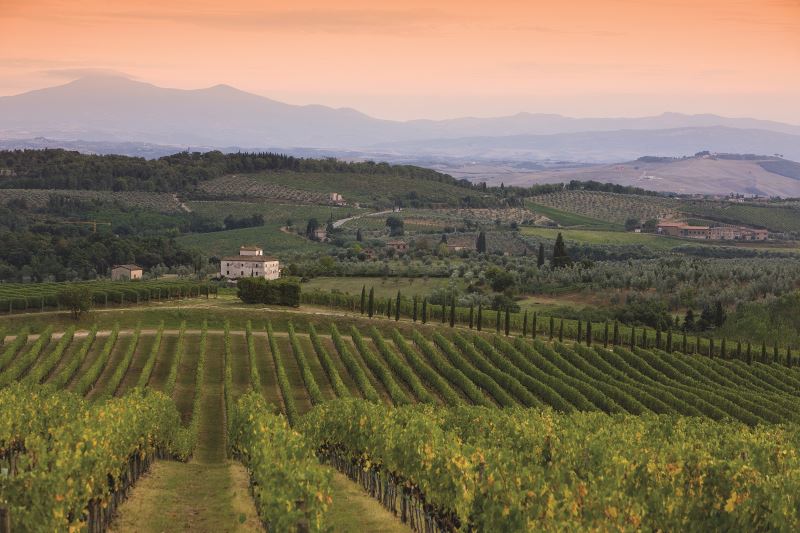 Thomas Jefferson, World War II soldiers, Hannibal Lecter: all appreciated a good Chianti. While Chianti has long been popular in the U.S.—Americans drink more than a quarter of Chianti’s annual production—it sometimes faces a Rodney Dangerfield

It’s their own fault. The question that Chianti has never settled on is whether it’s a brand, or a region. Many large producers push for the easy brand recognition to move cheaper, often rustic wine; more premium producers, particularly in Chianti Classico, argue for a terroir-based wine, as shown by the recent push to officially recognize the DOCG’s subzones. It’s a hard slog—getting lazy Americans to simply remember to say “Classico” is challenge enough—but many top producers are forging ahead.

In any case, Chianti continues to work on the shelf, and at the table. Outlets with stretched service staff can rely on the Chianti name to sell itself with many of their customers, and venues with a more hands-on approach can recommend a well-aged boutique example with confidence. Whether you treat it as a workhorse or a thoroughbred, Chianti, as a whole, adapts with equanimity.

Tuscany; the bulk of the Chianti region stretches from Florence down past Siena. However, it’s important to distinguish between the Chianti DOCG and the Chianti Classico DOCG; the latter, home to higher quality wines and a longer pedigree, is smaller, confined to a set of hills between those two cities. The larger Chianti zone is sub-divided int

o seven other zones, which are beginning to distinguish themselves.

Sangiovese reigns supreme; Chianti, alongside Brunello di Montalcino and Vino Nobile di Montepulciano, is the grape’s most famous home. Chianti DOCG wines must contain a minimum of 70% Sangiovese; international varieties (Cabernet Sauvignon, Merlot, Syrah, etc.) are permitted, as are local varieties like Canaiolo Nero, Colorino, and notably, the whites Malvasia del Chianti and Trebbiano Toscano. Chianti Classico calls for a minimum 80% of Sangiovese and also allows other local and international varieties, but no white varieties.

While the addition of international varieties, first permitted in 1996, meant Chianti could make darker colored, riper, rounder wines in the so-called “international style,” many producers feel even small additions of varieties like Cabernet Sauvignon and Merlot overwhelm the character of Sangiovese, and are turning toward 100% Sangiovese wines or blends with only small amounts of the traditional varieties Colorino and Canaiolo.

Early mentions of Chianti, both as a region and as a wine, go back to at least the 13th century. In 1716 Cosimo III de Medici, the Grand Duke of Tuscany, legislated that four villages define the official production zone (all four lie within the Classico region today). Late in the following century, Barone Ricasoli would articulate a preferred blend for the wines, placing Sangiovese firmly at the core of Chianti wines.

In the mid 20th century, the Italian government in effect allowed Chianti to be defined as a style, not a region; the Chianti Classico consortium came together as a direct reaction against the new law. Regulations tightened in 1984, when Chianti and Chianti Classico became DOCGs, and again in 1996, when, among other changes, yield requirements were tightened and white grapes were no longer required in the blend.

By-the-Glass: Most wines from centuries-old, classic regions come in at high price points, but many highly-regarded Chiantis, and even Chianti Classicos, are available at by-the-glass prices.

Pairings: Typically lighter bodied, with firm acidity and tannins, Chiantis are quite flexible at the table. While the tannins can be too much for seafood, Chianti is a red that stands up to even red meat without being too full-bodied or heavy, lending itself to summer grilling, for example. They work well with many vegetables (mushrooms, eggplants, etc.) and of course, the acidity makes it great with tomato sauces and pizza.