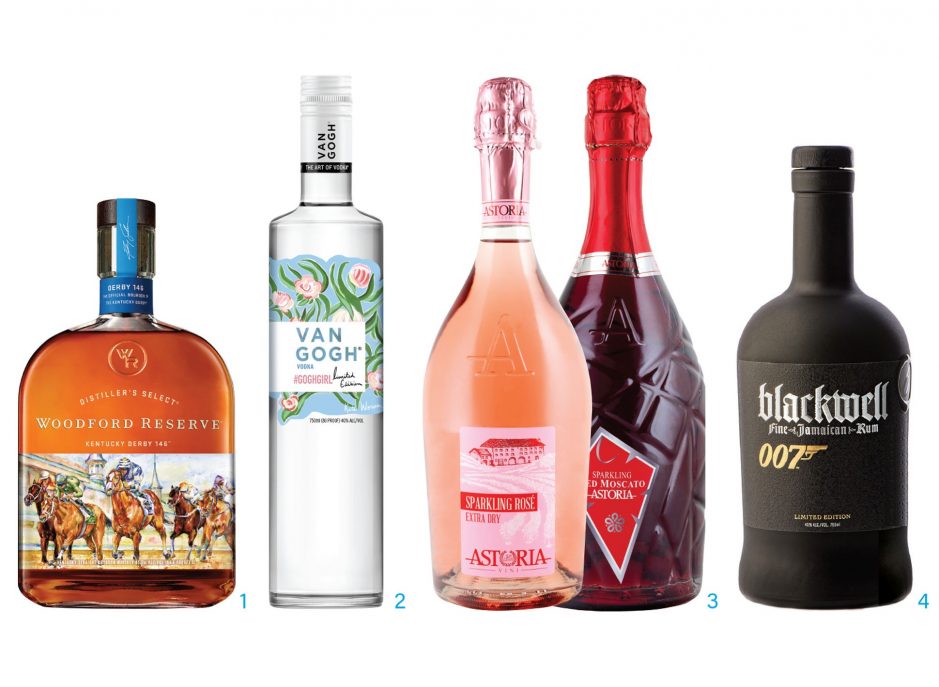 Woodford Reserve is honoring “The Greatest Two Minutes in Sports” with the release of its 2020 commemorative Kentucky Derby bottle. The work of Louisville artist Richard Sullivan, a former Atlanta Braves baseball player, the 1-liter bottle features a bold watercolor image of thoroughbreds thundering toward the finish line, with the famed Twin Spires of Churchill Downs in the background. The Derby bottle has been an annual collector’s item anticipated by bourbon and racing fans since 1999.

Van Gogh Vodka is launching the first of an annual series honoring women and celebrating female creativity. Released on March 8, 2020—International Women’s Day—the inaugural edition features the artwork of Kate Worum, inspired by both Van Gogh and by women’s empowerment; $1 from each bottle sale will go to ArtTable, a professional organization dedicated to women in the visual arts. The #GoghGirl campaign will continue through the year with varied activations.

While the premiere of the next James Bond film, No Time To Die, has been pushed back due to the Coronavirus, Blackwell Rum’s partnership with 007 franchise is on schedule. Chris Blackwell—the Rock & Roll Hall of Famer and owner of Bond author Ian Fleming’s former residence, GoldenEye—is celebrating the release of the 25th Bond film with the April release of a 007 Limited Edition of Blackwell Fine Jamaican Rum. Fittingly, No Time To Die was partly shot in Jamaica.

In the foothills of the Andes, still within Mendoza Province, the San Rafael wine region is an oasis of fertile soil surrounded by a “high-desert.” It is in this “Oasis Sur” that Italian immigrant Valentin Bianchi planted grapevines and opened a winery in 1928. Now, the third and fourth generations of the Bianchi family honor their roots with the Oasis Sur label. The first two releases are a 2019 Malbec and Cabernet Sauvignon.

The cream liqueur category is showing some attention-grabbing innovation. Fresh to market—and representing first line extension of the iconic Italian brand in over 500 years—Disaronno Velvet is a smooth cream with the unmistakable taste of Disaronno. The velvety texture delivers fresh notes of apricot, almond, and vanilla. Serve over ice for straight indulgence or in a cocktails where cream liqueurs are featured. 34 proof.

Bridge Lane Wine, located on the North Fork of Long Island, is adding Bridge Lane Bubbles to their lineup of wine in cans. Bridge Lane (second label of Lieb Cellars) was among the first wine in NY to launch a canned wine, starting with a dry rosé in July of 2017. In 2018, three varietal wines and a Red Blend were added. The new bubbly is made from estate-grown Riesling, plus Seyval and Muscat sourced from the Finger Lakes.

Its first single-estate whisky, Glenmorangie The Cadboll Estate was distilled entirely from barely grown on the estate and overseen by its acclaimed creator, Dr. Bill Lumsden, to capture the essence of Glenmorangie from grain to glass. Having chosen the barley, he then guided exactly how it was dried and malted. With 15 years in ex-bourbon casks, The Cadboll Estate delivers oaky depth, magnifying Glenmorangie’s signature soft, fruity style.

El Mayor Tequila is debuting a fresh look, with embossed details around the bottle neck and base; a completely redesigned front and back label; a natural cork; and a modernized brand logo. The tequila itself is the same, but the brand believes the new bottle is more “shelf-friendly” and better highlights the line’s premium qualities. The redesign will apply to the entire El Mayor family, including Blanco, Reposado, Añejo, Extra Añejo, and Cristalino.