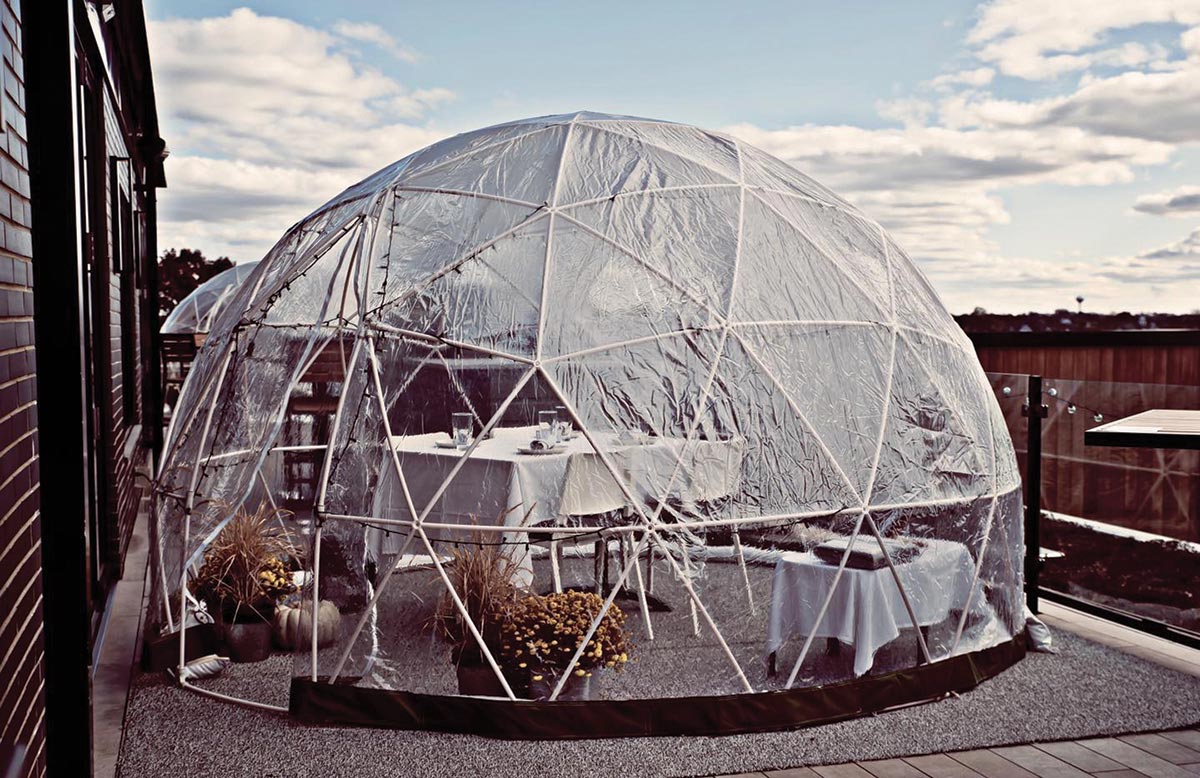 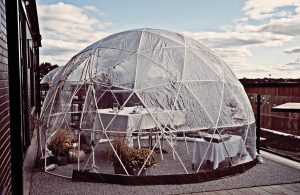 Outdoor-dining options, such as igloos at Mare Rooftop in Providence, offer a more private seating option as COVID-19 guidelines loosen.

As the one-year anniversary of the first COVID-19 restrictions on service approached, there was some good news for Rhode Island’s hospitality industry as the state’s COVID-19 test positivity rate continued to decrease. In response to those lower numbers, lawmakers relaxed some restrictions on gathering and restaurant dining. Rhode Island’s weekly test positivity rate was 3.4% as of press time.

The Rhode Island Department of Health and the Rhode Island Hospitality Association (RIHA) continued to work with Lt. Gov. Dan McKee to relax limitations that had been placed on restaurants since November.

The first pressure point released was the curfew imposed on restaurants in November, which required all venues to stop serving food and drinks to customers by 10 p.m. on weeknights and 10:30 p.m. on weekends. The early closing times had been placed on venues in November in an effort to slow the spread of the coronavirus, but many hospitality industry members criticized the decision from the beginning, arguing that it had very little impact on the state’s COVID-19 case numbers. Through an executive order issued on Jan. 28, restaurants were allowed to resume their normal operating hours beginning on Jan. 29, a move that industry members hoped would bring them much-needed sales revenue. Bars and bar seating were allowed to reopen with some limitations per a Feb. 11 executive order.

A statement from RIHA said the group was “encouraged by the decision to lift some restrictions so that businesses can serve limited, socially-distant customers at the bar. RIHA has been advocating on behalf of our industry by engaging in constant, ongoing discussions with the Governor’s office, Lt. Governor McKee, the RI Department of Health and RI Commerce to safely reinstate this vital aspect of hospitality operations, and while the limitations are still not perfect, these changes are a critical first step in moving forward.”

New capacity limits were also announced for catered events in January. Under the latest guidelines, indoor events are currently allowed to have 30 people or less, upon receiving negative COVID-19 tests. Outdoor events are capped at 50 people with COVID-19 testing. Events must have a designated “COVID Safety Officer” in attendance, who remains on-site during the event to ensure all COVID-19 protocols and guidelines are followed. Weddings that were scheduled to occur after Dec. 20, 2020, with a number of guests that exceed these limits may seek an exception from the Department of Business Regulation.

More federal relief on the horizon

Many affected businesses were able to take advantage of more funding through the latest federal stimulus package, the Consolidated Appropriations Act, which was signed into law on Dec. 27. Through The Relief Act, businesses who qualify will be able to receive both Paycheck Protection Program loan funding and enhanced benefits through the Employee Retention Tax Credit (ERTC), a refundable tax credit against employment taxes, including Social Security and Medicare, of qualified wages an employer pays to its employees. In 2021, the ERTC covers up to 70% of eligible wages paid by the employer, with a total credit of up to $14,000 per employee. These benefits through The Relief Act extend until June 30.

President Joseph Biden’s administration began working to pass its $1.9 trillion COVID relief bill, the American Rescue Plan, the details of which were announced on Jan. 15. While more relief for the hospitality industry was promised through the bill, other aspects of the bill, including its Raise the Wage Act – which would require states to increase their minimum wage incrementally until reaching $15 per hour while eliminating the tip credit – caused concern among trade associations.

“The Raise the Wage Act imposes an impossible challenge for the restaurant industry,” said Sean Kennedy, Executive Vice President of Public Affairs, National Restaurant Association, in a statement. “While other businesses on Main Street are starting to see a recovery, restaurants across the country are struggling to stay open amidst indoor dining bans or limits that have been in place for ten months … Our industry runs on a 3-5% pre-tax profit margin in a good year – during a pandemic is not the time to impose a triple-digit increase in labor costs. Far too many restaurants will respond by laying off even more workers or closing their doors for good … The elimination of the tip credit will cut the take-home wages of thousands of tipped employees who make far above the proposed minimum hourly wage. These skilled hospitality professionals generally earn between $19-25 per hour and have made clear many times before that they support a tipped minimum wage.”

More direct payments, totaling $1,400 per individual, are currently planned for people with incomes of less than $75,000 per year. On Feb. 4, the latest version of the RESTAURANTS Act, which would designate approximately $25 billion to restaurant relief, was unveiled. The bill was passed on Feb. 10, with incremental increases in the minimum wage expected to begin in January 2022. The wage and tip credit amendment hadn’t been voted on yet in the Senate as of press time.

Locally, financial help is still available through several avenues, including the Rhode Island Hospitality Employee Relief Fund, a grant program open to hospitality-industry employees who are employed by active members of RIHA and who are facing financial hardship due to being laid off during the pandemic. The one-time grants of $250 are awarded on a first-come, first-served basis to up to five employees through the eligible companies.

Grants for Engagement, Service, and Resiliency activities in the sum of $1,500 were available through Feb. 15 through the Providence Warwick Convention & Visitors Bureau and RIHA to be used on expenses incurred from Nov. 1 through Feb. 15 for costs associated with the donation of food items to staff or nonprofit organizations, for holding virtual dinners for guests who picked up takeout, for implementing new POS systems for online ordering and delivery, and for implementing curbside pickup programs and loyalty programs.

Delivery services join in help efforts for restaurants in crisis

DoorDash announced on Jan. 27 that it would donate $250,000 in COVID-19 relief funding to Rhode Island restaurants as they continue to cope with business effects brought on by the pandemic. Available through DoorDash’s Main Street Strong Pledge, eligible restaurants who apply will each receive a one-time $5,000 grant to be used for operating expenses including rent, payroll, the purchase of PPE and outdoor-dining equipment.

“COVID-19 has brought immense, widespread challenges for our communities, but the restaurant industry has been hit especially hard by the fallout from the virus,” Dale Venturini, President and CEO of RIHA, said in a statement. “Seating capacities and other restrictions have created intense barriers, but thanks to DoorDash’s relief efforts, restaurants will be able to stay engaged in their communities.”

To be eligible, restaurants must be located in Rhode Island, have no more than three locations, $3 million or less in 2019 annual revenue per location and employ no more than 50 people per location. Restaurants do not need to be featured on the DoorDash platform to qualify. Applications were accepted through Feb. 17. Restaurants were notified of funding availability by March 1, with grants planned for receipt by early May.

Uber Eats announced its own Restaurant Grant Program in February. Through the $4.5 million Restaurant Grant Program administered through Local Initiatives Support Corporation, qualifying restaurants will receive one-time grants of $5,000 to pay for necessities including rent, payroll, debts to vendors, expenses for technological upgrades and other operational costs. The grant program is part of Uber Eat’s Local Support Effort, which will provide more than $20 million in support to the industry over the next six months. To be eligible, restaurants must be Uber Eats or Postmates restaurant partners, have fewer than five locations and a maximum of 50 employees per location.