Saké is hot! Perhaps not literally. While hot saké is still popular, much of the growth in the U.S. is in premium styles, typically consumed chilled. More than a third of Japan’s saké production comes to the U.S. these days, and that doesn’t even account for the majority of saké Americans are drinking, over 70% of which is domestic.

While most drinkers still probably have their first saké experience at a sushi restaurant, saké is also finding a place in retail shops and Western restaurants, just as other Japanese ingredients like wasabi are finding new homes. Wine and beer importers are taking note, so saké is moving beyond specialist Japanese importers, who have traditionally focused on Japanese outlets. Wine and spirits importers have added saké to their books and are bringing it to all sorts of accounts. The recently signed Trans-Pacific Partnership agreement will also make it that much easier for saké to find it’s way here.

Is there saké terroir? Not really; breweries can source rice from anywhere, even outside Japan. In the past, regional brewers guilds maintained their own sets of brewing practices, and the local water can also affect a saké’s character.

Rice: There are 60 types of rice traditionally used for saké, but today nine dominate production. A few important ones:

Water: As with beer brewing, water is added at several points; the local water is often a determining factor in brewing styles. Hard waters encourage a more complete, drier fermentation.

Yeast: There are 15 officially approved yeast strains. #7 is the most used; #15 is prized for creating aromatic complexity. 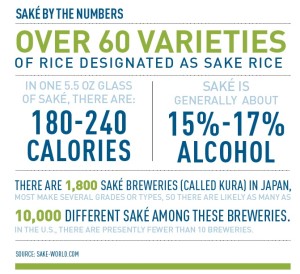 Saké quality and style is all about milling the rice; the more the outer part of the rice is milled away, the purer the resulting flavors. Daiginjo is the purest. The other factor is whether the saké is made solely from rice, or if it has neutral brewers alcohol added. Pure rice saké is called Junmai. When alcohol is added, the saké is Honjozo.

Adding alcohol became a practice in response to rice shortages after World War II. Most quality saké in the U.S. is Junmai – pure rice – but Honjozo styles are not necessarily to be
looked down on, and often win awards in Japan.

Daiginjo and Ginjo sakés are more expensive – it takes more rice per liter than a less milled style – so they’re naturally considered more premium, but in many cases it’s more a difference of style than quality. 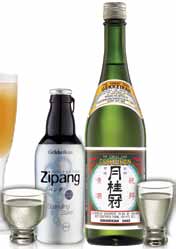 Saké remains still little-known to many Americans, but this spells opportunity. No company knows this better than Gekkeikan, the largest supplier of saké in the U.S. market, accounting for over half the saké sold here in grocery stores.

Premiumization is Key. Gekkeikan is finding that the majority of their growth here is being fueled by premium offerings like Horin and Black & Gold.

THE SMV – Saké Meter Value – is a useful label indicator for how sweet a saké is.
“0” is the mid-point, with higher numbers being drier, and negative numbers sweeter.

Saké is a bit of a wild card for mixology. Perhaps the most basic example, the Saketini—with saké taking the place of vermouth in a classic, not very dry martini—demonstrates how saké adds body and roundness to a cocktail. Here are some of saké’s advantages at the bar:

Today’s beverage market is flavor-driven, so why shouldn’t modern saké get in on the fun? TY KU, has entered on- and off-premise with
two saké infusions: Cucumber and Coconut.

Cucumber is hot, and TY KU’s Junmai infusion is delicate and refreshing, with cucumber flavor evident right through the smooth finish.

TY KU Coconut, a Nigori infusion, has a silky texture and creamy taste, with a subtle hint of vanilla. Both can be enjoyed chilled in a wine glass or mixed in cocktails.

Saké is fermented, not distilled, so it is not a spirit. It is fermented from rice—which is a grain, rather than fruit—which makes it more like beer than wine. However, stylistically (not carbonated) and flavor-wise, saké is closer to wine than beer.

Saké originated in China, not Japan, thousands of years BC. An industrial revolution in Japan in the 1300s set the stage for large-scale production.

There are reputed to be 400+ flavor components in saké, about twice the number found in wine. Most importantly with respect to food, the structure of saké is considered by many to be better than wine in terms of complementing umami flavors in food. Umami—sometimes referred to as the fifth taste, alongside sweet, sour, bitter and salty—describes the savory taste that comes from amino acids and nucleotides in foods such as fish, cheese and mushrooms.