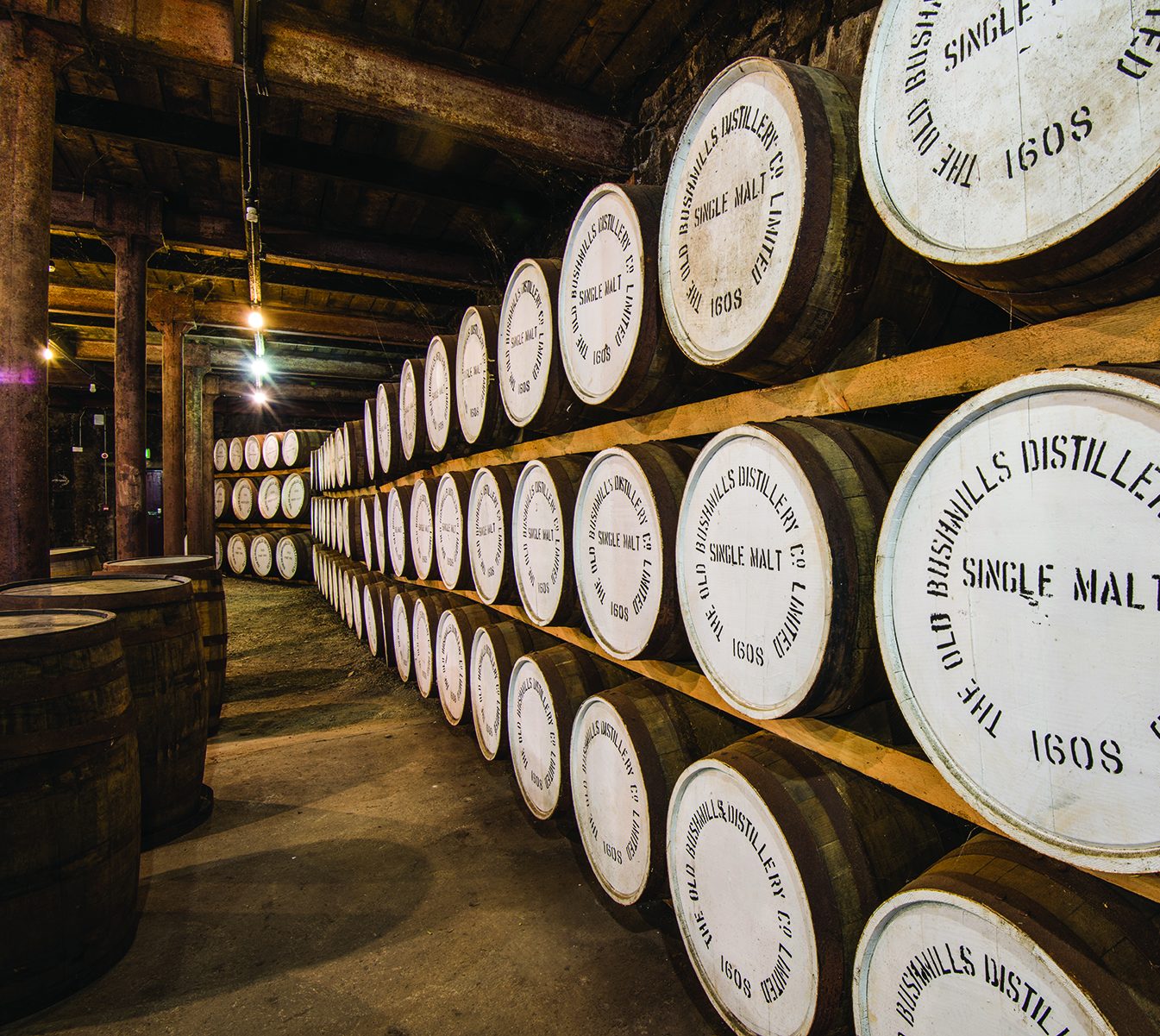 Why should Scotch have all the grand-finale fun? Egan’s is among many Irish distillers finishing their whiskey in sherry casks; “Fortitude” ends up in PX sherry barrels.

Irish whiskey’s reputation as a mellow, one-dimensional spirit is being upended by an unprecedented amount of innovation and diverse new entrants. According to the Distilled Spirits Council (DISCUS), the high-end premium Irish whiskey category, representing SRP of $20 to $35, grew 1,106 percent between 2002 and 2018. And entries over $35 grew by a staggering 3,385 percent.

This flourishing movement represents the next phase in the evolution of Irish whiskey, whose overall U.S. sales topped $1 billion in 2018 and now account for 12 percent of the spirit market by value.

The Sexton, made by one of a few female master blenders in the industry, uses oloroso sherry barrels.

Bridge Between Old and New

Understanding Irish whiskey today calls for a dram of history. In the 20th century, Prohibition and the Irish War of Independence were catastrophic. The country’s two main markets for whiskey—the U.S. and the U.K.—disintegrated. By the 1950s, all but two distilleries—Bushmills in the North, and Midleton in County Cork (producer of Jameson and Powers)—had died off.

While the industry’s most explosive growth has taken place in the 21st century, the seeds of renewal were effectively planted in 1987, when John Teeling converted a potato alcohol plant in County Louth into the Cooley Distillery.

Though it was always intended for large-volume production, one could argue that Cooley propelled what became a wave of modern craft Irish whiskey distilleries. Cooley is where then-emerging brands Connemara (which started the Irish peated whiskey movement),

The Tyrconnell, and Kilbeggan were produced. (Cooley and its brands were eventually sold to Beam Suntory in 2011, and some operations have shifted to the once-shuttered Kilbeggan Distillery, where the first modern-day Irish small-batch rye has been produced.)

Bushmills was ahead of the curve in terms of age statement single malts and intriguing finishes, such as rum and cider.

The years following the sale of Cooley were marked by further expansion. Brands and distilleries either grew from the dust of shuttered businesses or sprouted as new entities. In 2011 there were four distilleries operating in Ireland; today there are close to 20, and a dozen more are in planning.

In 2015, John Teeling’s sons, Jack and Stephen, launched Teeling Whiskey in Dublin, initially using some of the barrels they acquired from Cooley. “Irish whiskey at this time was very one-dimensional,” says Jack Teeling, “[and] based around heritage brands with a very accessible taste. To us, it was crying out for a more craft-oriented premium Irish whiskey with a unique full flavor and distinctive brand personality to capture the imagination.”

In retrospect, the commercial success of Jameson both drew in thirsty consumers and compelled other brands to develop effective points of distinction.

The Irish startups of the 21st century are pursuing a range of profiles and identities, creating a wildly diverse landscape not seen before in the category.

Some chose to release matured, sourced whiskey—typically single malts but sometimes single grain and pot still whiskeys as well—with sophisticated wine and spirit cask finishes. These include Egan’s, The Sexton, Knappogue Castle (most recently single malts finished in Marsala, Barolo, and Bordeaux casks), and Lambay (which is finished in cognac barrels), among many others.

Slane, like many brands, is both old and new. Slane Castle has been in the hands of the Conyngham family since it was built in the late 18th century. In the modern era, Slane has become well-known for its rock music festival, first staged in 1981; and now Irish whiskey, created in 2017 in collaboration with Brown-Forman.

Some distilleries, as many of their American counterparts have done, chose to source and bottle whiskey until their own distillate is matured—these include Pearse Lyons (now distilling in a former church in Dublin’s Liberties neighborhood) and Clonakilty in County Cork. Tipperary Distillery, located at Ballindoney farm, is using its own water to cut sourced distillates while its heritage barley whiskeys mature.

With increased sourcing, greater attention to blending naturally followed. Louise McGuane is a leader in the revival of bonded whiskey in Ireland; she operates on a family farm in County Clare, where she’s bringing back the J.J. Corry brand (named after a legendary nearby whiskey bonder). McGuane blends and matures whiskeys from multiple sources. Her first release, The Gael, features whiskeys that are from 7 to 26 years old.

Whiskey tourism is catching on in Ireland. Tipperary Distillery has partnered with Dundrum House Hotel and Golf Resort to build a much larger distillery at the hotel and begin welcoming visitors in 2021. Pictured, right: Tipperary co-founder Jennifer Nickerson.

Part of what has fueled the American craft movement is an emphasis on local ingredients; Ireland’s 21st-century startups are no different. West Cork (one of the few distilleries in Ireland to boast actual Irish ownership) uses Irish barley exclusively, as well as fresh local spring water. On the finishing end, West Cork’s Glengarriff Series features specific chars (e.g., Peated and Bog Oak).

Startups focused on distilling their own whiskey are gaining traction. Glendalough, in the Wicklow Mountains south of Dublin, first made a splash with its unaged poitín (the Irish equivalent of moonshine, also known as potcheen—a style that had been illegal for centuries) but is now in the pot still and single malt game, recently with a 13 Year single malt finished in Japanese mizunara casks.

A vintage scene from Midleton Distillery, where Jameson, Powers, Redbreast, and the Spot whiskeys are produced.

Larger, established brands, which have greater stocks to work with, have answered the growing craft demand by increasing their age-statement single-malt expressions—again, often with intriguing finishes. Bushmills now has single malts aged 10, 16, and 21 years, the latter two finished in port and madeira casks, respectively. The Tyrconnell last year added a 16 Year Old finished in casks seasoned with oloroso and moscatel, joining a trio of 10-year-olds.

Tullamore D.E.W. opened a new facility in 2014 that brought whiskey production back to its home in County Offaly for the first time in 60 years. Tullamore has branched out with cask finishes of Caribbean rum as well as cider, and it’s the only distillery in Ireland dedicating separate stills to grain, malt, and pot still production.

Although the pot still whiskey tradition—a distinctly Irish creation with a mash of both malted and unmalted barley—has been embraced by many of the new distillers, it’s a style that was given premium status by Irish Distillers. Midleton distillery began releasing Redbreast single pot still (like a single malt in that it originates from a single distillery) age-statement whiskeys in the 1990s, and its Spot pot still labels (Green, Yellow, Red) several years later, as well as premium releases of heritage label Powers, such as Three Swallow.

As would be expected given recent growth and Ireland’s famously vibrant culture, the current U.S. Irish whiskey market is peppered with brands that connect with Irish culture. Claddagh and Donegal Estates conjure images of the Emerald Isle. The Pogues Irish Whiskey is the toast of the punk band’s fanbase. Slane is familiar to rock ’n roll fans, thanks to the famous Slane Castle Concert series. Then there are the two Irish whiskeys with a rough and tumble image: mixed martial arts champ Conor McGregor’s Proper No. Twelve; and John L Sullivan, recalling the legendary Boston-based boxer.

Bikram Singh, the owner of Norfolk Wine & Spirits in Norfolk, Massachusetts, keeps more than 50 bottles of the store’s more than 90 selections of Irish whiskey open, including those from independent bottlers like Blackadder and Exclusive Malts, so that customers can become accustomed to the various styles. “The diversity of whiskeys from Ireland has really grown over the last few years,” Singh says.

Cocktail-focused bars with extensive Irish whiskey selections, such as The Dead Rabbit in New York City, see the emerging range of styles and flavors as new opportunities for mixing. “One of the beauties of using Irish whiskey in cocktails is its versatility,” says Jillian Vose, The Dead Rabbit’s beverage director and managing partner. “A pot still will make a much different drink than a single malt, blend, or single grain.” For its signature Irish Coffee, the bar uses Bushmills because of its lighter style, to match the coffee and cream. “Put in a pot still like Powers John’s Lane and it’s all wrong,” says Vose, “even if the whiskey is a gorgeous one.”

Vose advises using Irish whiskey in other types of cocktails too: “I like using the stone fruit and floral notes of, say, Knappogue 12 Year Old to make lighter-style Manhattan variants. Pot stills are heavier and go well in darker Manhattan and Old Fashioned-style drinks.”

What will the new decade bring for Irish whiskey? “I am a firm believer that there are still huge opportunities for Irish whiskey,” says Jack Teeling, “It’s my view that we are in the middle of a long-term up-trend for premium Irish whiskey.”

Jameson: Leading & At the Cutting Edge

The craft movement sweeping the world of Irish whiskey has only benefited category leader Jameson. Accounting for roughly three out of every four bottles of Irish whiskey consumed in the U.S., Jameson has carried the Irish category to new heights, maintaining double-digit annual growth even as the brand enjoys near-complete market saturation. While the shot-friendly triple-distilled flagship whiskey remains king, Jameson has been hugely successful with innovative, premium spin-offs as well.

Black Barrel, launched in 2013, presented Jameson in twice-charred barrels. Jameson Caskmates followed, with five editions, each featuring Jameson finished in casks that were seasoned in a specific craft beer; the Stout (2015) and IPA (2017) editions became part of the permanent line.