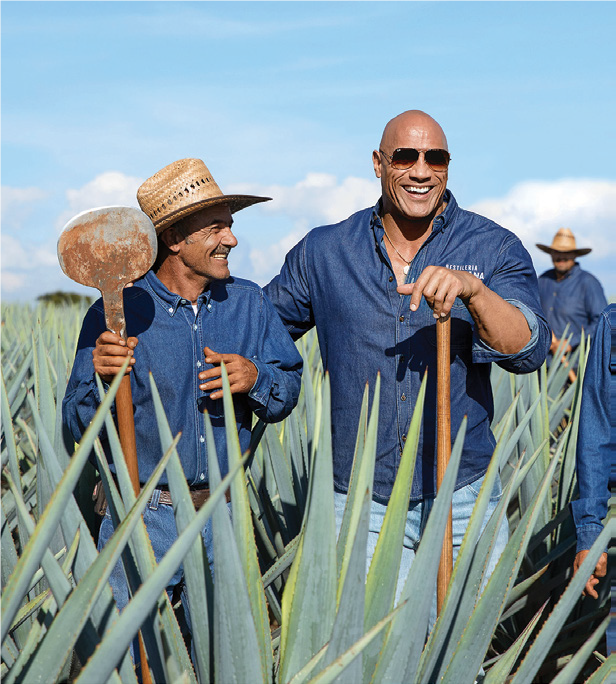 There’s a gold rush in Mexico as a growing number of famous personalities launch tequila and mezcal brands—but which ones will have staying power?

When Keeping up with the Kardashians star and fashion mogul Kendall Jenner announced in February that she was the force behind 818 Tequila, social media exploded with accusations of cultural appropriation and then counterclaims of sexism.

Few spirit brands command anything like that sort of social media attention, and when the dust settles, what the public will likely remember is that Jenner is now in the tequila business—like so many celebrities these days.

The list of famous names in film, TV, music, sports, and technology getting into the agave game continues to grow, all, to some degree, attempting to harness their social influence to drive sales.

While celebrity-owned brands are hardly new (there’s even an online marketplace, GrapeStars, offering direct-to-consumer sales of celebrity wines and spirits) the recent surge in star-powered tequila and mezcal brands is remarkable.

Why agave and why now? The category’s surging success is one draw: Tequila and mezcal have been exploding through the pandemic, posting the highest growth of all spirits categories in volume (8.5 percent) and revenue (17.4 percent) last year, and agave distillates now comprise the fourth-largest spirit category after vodka, American whiskey, and rum, according to the Distilled Spirits Council.

The appeal of agave is obvious, says Ken Austin, who helped Dwayne “The Rock” Johnson create his Teremana Tequila brand and guided Tequila Avión to a multi-million dollar payout from Pernod Ricard: It’s fun, exciting, and especially attractive to the West Coast-based entertainment industry so close to Mexico. “There’s a gold rush going on with tequila in the celebrity world, and I think others will get into this space,” says Austin.

Yet just how many of these brands will be around in a few years? “With any gold rush, there’s always a shakeout,” adds Austin, “and in the end, the gold rush will slow and the people who got into it to make a quick buck will vanish.”

The Quest to Prove Authenticity

None have been as savvy about the twinned power of celebrity and social media as Johnson, who for several years kept his Instagram followers informed of the development of Teremana. Breaking Bad’s Bryan Cranston and Aaron Paul also shared stories of scouring the fields of Oaxaca to create Dos Hombres mezcal.

Some celebrity-backed tequilas can sell for high prices based on name recognition alone. Elon Musk’s limited release, $250 Tesla Tequila, for instance, was first teased as “Teslaquila” via social media years before selling out on Tesla’s website days after launch last November.

But largely, there seems to be an understanding that the celebrity association alone can’t justify the super-premium price tags of many of these brands, so stars are eager to prove their commitment to quality to their large audiences.

Last year, LeBron James launched Lobos 1707 ($54.99 for the mezcal, $44.99 for joven tequila, $149.99 for extra añejo) which uses Pedro Ximenez sherry-seasoned barrels for aged expressions. Also leveraging basketball fame, Michael Jordan released Cincoro in 2019 ($70 for blanco, $90 for reposado, $130 for añejo, and $1,600 for extra añejo) which boasts an ultra-smooth and complex flavor profile from a combination of highland and lowland-grown agaves.

The list goes on: Pit Bull has backed emerging brand Espanita, singer Nick Jonas and designer John Varvatos teamed up for Villa One, Sex and the City’s Chris Noth took a share of Ambhar, Sean Combs partnered in a joint venture with Diageo for Deleón. Mexican celebrities are participating, too: Ojo Tigre Mezcal has teamed up with actor Luis Gerardo Méndez, and the brand just launched mezcal seltzer cocktails as well. Country star Jon Wolfe debuted Juan Lobo in 2019 which is produced using Champagne yeasts and supposedly benefits from the classical music that is played in the warehouse at the Feliciano Vivanco distillery in Arandas.

Espanita pairs with Pitbull for promotions. Photo courtesy of Espanita.

“This Is Us” actor Justin Hartley and singer Babyface, in partnership with founders and ex-music executives Micah McFarlane and Jacqui Thompson, are testing the growing interest in more esoteric agave expressions with the launch of Revel Avila, a 100 percent Blue Weber agave spirit made in the Morelos region of Mexico (and therefore not permitted to be labeled tequila). Piñas are thrown into a pit filled with local volcanic rock, then covered with sand and leaves and roasted for 48 hours, giving Revel a subtly smoky profile.

Other brands are finding ways to connect with performers: Espolon is continuing its sponsorship of HBO’s A Tiny Audience, episodes of which feature a chart-topping Latin artist in performance.

All, of course, operate in the shadow of George Clooney and Rande Gerber’s Casamigos, the tequila and mezcal brand founded in 2013, which Diageo scooped up for $1 billion in 2017. Interestingly, while they are credited as the first celebrity tequila connection, stars Bing Crosby and Phil Harris arranged for the distribution of Herradura as the first 100 percent agave tequila in the U.S. in the 1940s.

Besides the obvious opportunistic appeal of the growing category, agave spirits over the years have developed a reputation for authenticity that many find compelling. Some consumers even like to claim (without evidence) that the so-called purity of the agricultural product makes agave spirits a “healthier” option.

Plus the barriers to entry for a new agave brand are relatively low. Many Mexican distillers custom produce a dozen or more bespoke or off the rack brands for entrepreneurs, so it’s not necessary to own or operate a distillery. While Teremana operates its own distillery, all other brands included in this feature are using contract distillers to produce.

And then there’s the social media advantage: As spirit companies increasingly scramble to devise social media marketing schemes to accelerate their brands, celebrities provide a premade following. “In today’s world, before you start marketing in any medium, you have to consider social media because it’s such a big part of people’s lives,” says Roy Danis, the president and CEO of premium spirits company Conecuh Brands.

To create its Próspero brand, Conecuh partnered with pop star Rita Ora, well-known internationally if less so in the U.S. Ora was brought on as a creative partner as the brand was launched in 2019.

“Historically, the category had a bit of a male skew,” says Danis. “I wanted to create a brand that invited women into the space as much as men. But how can you launch a new product in a very competitive environment and cut through the clutter?” He connected with Ora to help with the marketing efforts, and she’s now the chief creative partner, bringing along over 30 million social media followers.

How involved these celebrities are with the brands varies; in the case of Teremana, says Austin, Johnson educated himself about everything from Brix levels to agave piña roasting methods and outlined his specific requirements, including creating a separate registered production process on the estate, opting for brick ovens and copper stills and setting a relatively low price for a celebrity brand ($29.99). After trying more than 110 samples, Johnson signed off on the product.

Perhaps the celebrity with the most agave credibility is Sammy Hagar, who launched Cabo Wabo in 1996 and sold it to Campari in 2010. Hagar more recently teamed with chef Guy Fieri to launch Santo Tequila in late 2019 after introducing the tequila/mezcal mash-up “mezquila” in 2017—a new iteration that came from sampling tequila and mezcal together in cocktails, according to Santo managing partner Miles Scully. Hagar and Scully connected with cook Guy Fieri for his palate and strong TV ratings.

Working through about 300 combinations, the goal was “to bring the tequila drinker to mezcal by creating something that was in between, like a spicy blanco with a little smoky kick at the end,” says Scully. At first they had trouble finding their target market, as potential consumers seemed confused by the new category. But after launching a blanco tequila in 2020, sales for both took off. Reposado and añejo tequilas are on the way.

The simultaneous surge in interest in mezcal and increase in Blue Weber agave prices has helped bring mezcal to the world of American celebrities. When Avion started, agaves sold for around .50 pesos per kilo and as of fall 2020, prices were around 30 pesos, says Austin.

Cranston and Paul were looking for a project as a result of the close relationship developed over the years of Breaking Bad, and the two almost literally stumbled upon the distillery where Dos Hombres is made on their first trip looking for a liquid to import. Cranston especially notes his previous ignorance of the category.

“So when Aaron said, ‘What about mezcal? I said, ‘Oh, no, no, no’—this knee jerk reaction,” recalls Cranston. “But we went to a mezcal bar and it opened my eyes because of the incredible variety of the spirit. I really had no idea.”

The two partnered with Gregorio Velasco Luis, who formerly produced the critically acclaimed Pierde Almas Mezcal (purchased by Diageo in 2018) at his distillery. “If Gregorio stops making Dos Hombres, we’re out of business,” says Cranston. “He’s incredibly important to us. We know very little about this.”

Like other celebrities new to the spirits industry, Cranston and Paul are working their way through the various culs-de-sac that can waylay a brand. They recognize that regardless of celebrity association, building a successful brand requires commitment to quality, plus a lot of persistence.

As Danis says, “We’ve all witnessed celebrity brands that come and go. If the brand is all about celebrity, that is really not a sustainable long-term selling proposition. Because if the celebrity loses interest, the brand declines.”