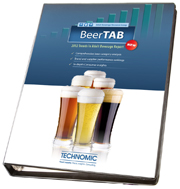 Beer remained the largest segment of the U.S. adult beverage industry, accounting for more than four-fifths of total alcohol volume, but was challenged by both economic and consumer trends that resulted in a 1.3 percent decline in 2011. Total beer volume was 2.8 billion 2.25-gallon cases for the year, according to Technomic’s recently-released “2012 BeerTAB” (Trends in Adult Beverage) report. Consumers are gravitating to the wine and spirits industries with new product offerings such as flavored vodkas, category-crossing whiskey liqueurs, sweet reds and high-end blends. The report says, “Domestic beer saw declines due to its lack of innovation and ability to connect with consumers. With the largest segment, Light beer, losing 39.2 million 2.25-gallon cases, the other beer segments could not make up for the loss. The Craft and Imported beer segments’ continued success helped to offset some of the overall industries’ declines.”