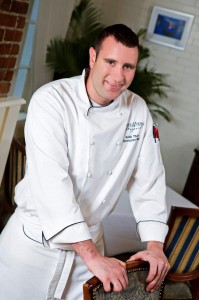 Chef Kevin Thiele has been named Food & Beverage Director at the historic Hotel Viking in Newport, Rhode Island. In his new position, Thiele will oversee all food and beverage operations at Hotel Viking, including banquets, and in-room dining in addition to the menu development and management of the hotel’s dining venues which include One Bellevue, the seasonal Top of Newport, and the newly renovated Garden Patio which is open from Memorial Day to Labor Day.

A graduate of Johnson & Wales, Thiele, started as a line cook at Hotel Viking in 2004. His talent and devotion to all things culinary steadily moved him up the kitchen ladder. In 2005 he earned the title of Executive Chef. In August 2012, he was promoted to Director of Food & Beverage while still retaining his oversight of the culinary departments. Chef Thiele has placed first in the Newport Winter Festival’s Chili Cook-Off, was a featured chef in the Annual Kinsale Ireland Festival of Fine Food, and was awarded Chef of the Year by the Rhode Island Hospitality and Tourism Association.

“Kevin is an integral part of the food and beverage operations and has been since he took the helm as Executive Chef eight years ago,” said Marlen Scalzi, Director of Marketing at Hotel Viking, “From sourcing more locally grown products and sustainably caught fish, Thiele is a leader in the local food movement and we are very excited that he will continue to grow the food and beverage offerings at the Hotel Viking.”