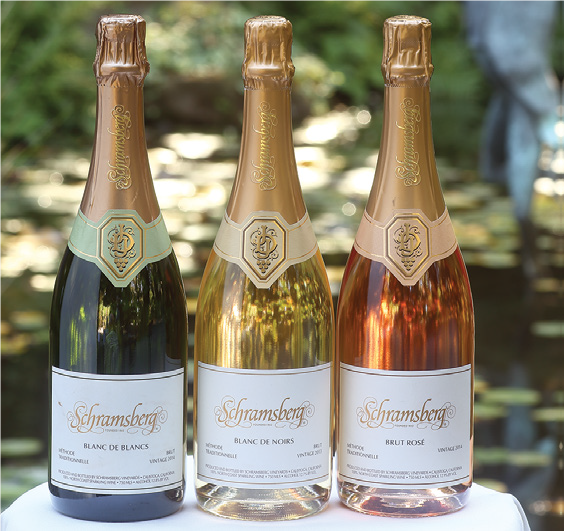 As emerging and legacy domestic sparkling wine producers alike invest in quality and ageability, the U.S. market is ready to embrace a wider array of home-grown bubbly

At the same time, changing consumer mindsets and Champagne supply shortages have allowed American sparklers to penetrate parts of the market that had primarily been occupied by their French counterparts. Producers have taken notice, resulting in an uptick in the number of winemakers crafting sparkling wine, the range of styles they’re crafting, and the quality and ageability of the wines themselves.

Classics like Roederer Estate, J Vineyards, Domaine Carneros and Schramsberg Vineyards largely built their reputations on excellent sparkling wines—after all, many were founded by the families behind the great maisons of Champagne—but even producers that haven’t traditionally been associated with bubbly have begun to focus on the category.

Noted Sonoma Pinot Noir producer Donum Estate, for example, recently released its first-ever sparkling wine, a 2016 Blanc de Blancs built on estate- grown, old-vine Chardonnay. “It was less about the market and more having enough fruit, as well as feeling that we could make a style of sparkling that is different from wines currently available,” says Donum’s winemaker Dan Fishman. “This sparkling wine is in a leaner, more austere style than is typical in California, and we feel that this is the ideal expression of our wind-swept blocks of Chardonnay.” 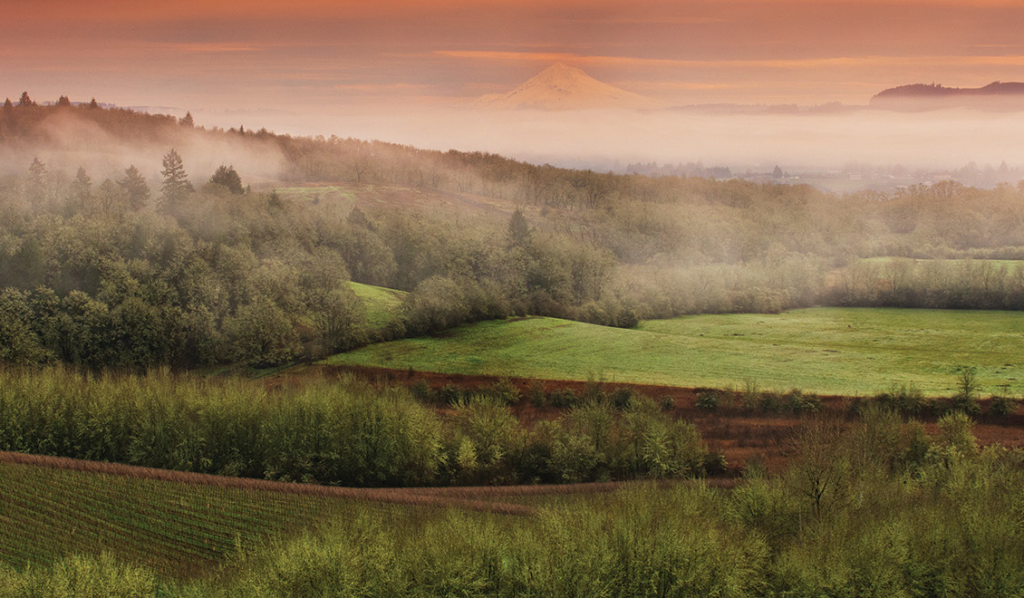 A view of the vineyard at Gran Moraine.

Just as the famous Champagne houses inspired early U.S. sparkling wine producers, for some, the motivation to create more and better sparkling wines stems from the quality and character of the many grower champagnes now available on the market. “I know personally, these wines gave me a feeling that, ‘I can do something like that—in my own way,’” says Shane Moore, the winemaker for Gran Moraine in the Willamette Valley. “My feeling is that many of us came to it from that angle, ultimately bringing more diversity and more offerings, meaning more competition and better wines over time.”

Others have turned to sparkling production for a more practical reason: climate change. With the nearly constant threat of fires on the West Coast, especially late in the growing season, producers have frequently been forced to harvest their fruit earlier than they’d like. When that happens, sparkling wine is a logical option, taut acidity being a key component of traditional-method sparklers.

“As producers have to more frequently contend with fire and smoke events, and have to pick earlier as a result—if the choice is between smoke taint and picking fruit at a lower brix and with higher acidity— there will potentially be more American sparkling wine on the market in coming years than there was before,” explains Jackson Family Wines’ Davis.

Many of these American sparkling wine newcomers are increasingly willing to challenge accepted wisdom when it comes to the category. Evening Land Vineyards in Oregon, for example, built its reputation on Pinot Noir and Chardonnay, but its pét-nat is changing preconceptions about how detailed, transparent, and serious that style of sparkler can be. Bodkin, in the North Coast of California, has won over professionals and consumers alike with its beautifully wrought sparkling Sauvignon Blanc. Producers like these, who are willing to buck convention, have given buyers a wealth of options to choose from that they didn’t necessarily benefit from before.

It isn’t just newcomers who are raising quality standards for American sparkling wine, either. From working with new clones and rootstocks to understanding the nature of fruit from one block as opposed to another, legacy American sparkling wine producers have accumulated significant knowledge. “Many of us have garnered greater experience in making bubbly over the years, and the wines are bound to get better,” says Moore.

This has also resulted in increasingly age-worthy American sparkling wines. “A focus on producing age-worthy U.S. sparkling has been in the works for decades,” says Hugh Davies, the president of Schramsberg Vineyards. Moore agrees. “With more producers focusing on artisan sparkling wine projects, it’s natural there will be more age-worthy bottles,” he notes. “I [recently] had a 2015 Adelsheim Brut Rosé that was singing!”

A market opportunity for American bubbly

At the same time, the market has become more receptive—and favorable—to American sparkling wines. First, consumer perceptions of sparkling wine in general have shifted from a category solely reserved for special occasions to one embraced for everyday consumption.

“Dismantling preconceptions over how and when sparkling wine can be consumed has been an important driver of engagement with new consumers,” says Dan Mettyear, research director for IWSR Drinks Market Analysis. “For years, sparkling wine consumption has been anchored on special occasions and the end-of-
year season. The broadening into more casual, summertime-oriented consumption has been at the core of the category’s steady expansion in recent years.”

While much of that shift was spurred by affordable sparklers like Prosecco, it has trickled up to higher-quality sparkling wines, too—including domestic ones. Market factors have also conspired to make top-quality American sparkling wine more appealing. Though consumer purchases of sparkling wine—specifically Champagne—plummeted in the early days of pandemic lockdowns, demand rebounded and combined with supply chain disruptions to create Champagne shortages ahead of the 2020 and 2021 holiday seasons.

“There was already an increase in demand and awareness for California sparkling wine that began before the recent Champagne supply issues,” explains Cohen. “There may be an even more dramatic bump in sales for American sparkling wine these holidays with the shortages of Champagne, but I think both categories will remain in a strong position when Champagne supply issues are overcome.”

It may be several years before those supply issues are overcome, though, thanks to smaller vintages in both 2020 (due to yield restrictions from the Comité Champagne) and 2021 (due to extreme weather), creating a continued gap that American sparkling is ready to fill. Champagne prices have also increased in recent years amidst rising demand and competition among buyers.

“As restaurants move through their stores of Champagne and begin to buy new vintages and bottles … we are no longer able to sell these bottles at the prices we had pre-pandemic,” says Jill Zankowski, the beverage manager for St. Anselm in Washington, D.C. Though she has seen a huge push in Champagne sales as consumers return to restaurants, “the initial push has waned, and people are reminded of the price tag of Champagne more often than not. The higher these prices go, the more likely folks will be to purchase the alternative, and American producers will inevitably benefit.”

Though buyers are looking for better-priced alternatives, it may take time before consumers readily reach for American sparkling (though prestigious domestic sparklers can climb well north of $100 per bottle at retail, many quality options can be found for under $40). “Thus far, I have not necessarily seen American bubbles as an easy alternative for Champagne, but I think that is simply a matter of time and availability,” says Zankowski.

And with the renewed focus on quality, variety, and terroir-expressiveness in American sparkling wine, there’s no reason why U.S. consumers shouldn’t consider these sparklers excellent alternatives to their French favorites. “What we’re producing is just as outstanding and every bit as delicious as French Champagne,” says Davies.

“Champagne producers themselves recognized this back in the ’70s and ’80s when they first came to California and began producing sparkling wine stateside as well.” But even more than that, it’s time to recognize everything that American sparkling wine has to offer in its own right—without comparison to Champagne. “With the right bottles, it’s not like there is a qualitative difference, but the two will never be congruent,” says Moore. “[That’s] the beauty of terroir.”