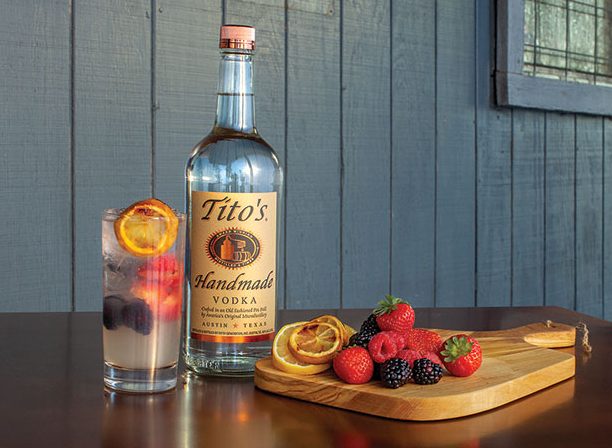 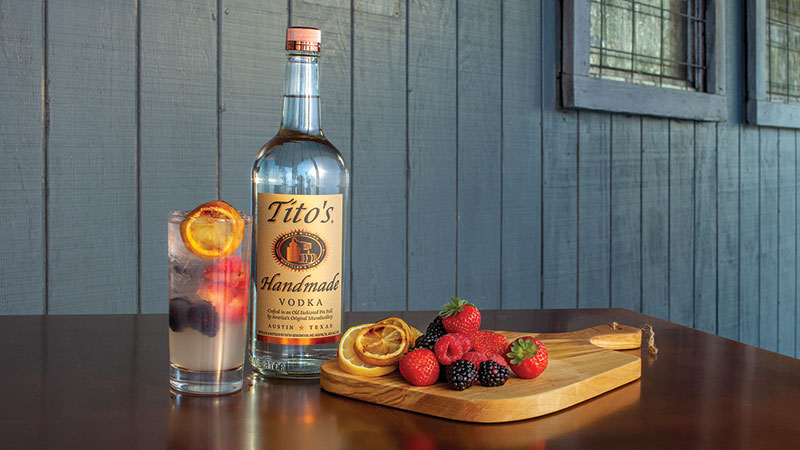 Tito’s Handmade continues to be a market leader and the centerpiece of Texas’s burgeoning vodka scene.

When Burnett’s, a top ten vodka brand with dozens of flavored versions, underwent a redesign last year, those in charge of the brand decided it was time to proclaim front and center: “Made in America.”

Is the renaissance of American whiskey alerting consumers that some pretty good clear spirits are made here? Perhaps it is social, or political, or even just a regional trend? Whatever is behind the boomlet, American vodka is suddenly considered something worth cheering about. Thirteen of the top 20 best-selling brands are American-made, as are many fast-emerging brands. Meanwhile, as the ultra- and super-premium tier of the vodka business sags, the price tiers below are filled with growing American brands.

All in all, a great time to be an American vodka.

“American-made vodka trends are the strongest they’ve ever been,” says Frank Polley, VP of Trade Marketing for Tito’s, now second only to Smirnoff in U.S. volume. “We’re also seeing the expansion of the American-made vodka segment with many new brand and line extension launches throughout the year. American-made vodka is definitely driving growth in the category.”

Vodka being famously fast to market, the category has seen a remarkable number of new brands succeed. “Over the past decade, the lines between domestic and imported vodkas have blurred as Americans are purchasing more domestically-produced vodkas,” says Michael Sachs, Director of Spirits Marketing at E. & J. Gallo Winery, whose New Amsterdam Vodka debuted in 2011 and is now a top seller. “American vodka brands are focusing on quality of original ingredients and the care put into production.”

Made in USA = Built for Competition 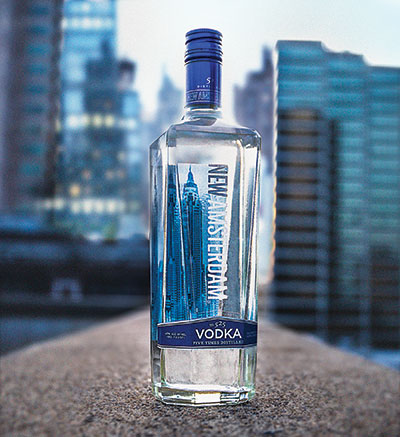 New Amsterdam is a top ten vodka, and not even ten years old.

“American vodkas are in a good position as competition among higher-end brands leads to price slashing,” says Reid Hafer, Senior Brand Manager in charge of Burnett’s and Deep Eddy for Heaven Hill Brands, although she notes competitors in the $10-$15 and $15-$25 tier where most American vodkas sell are also cutting prices.

While the flavor craze churned vodka sales madly a decade ago, that tide has receded; unflavored vodka commands 85% of all vodka consumed in the U.S., points out Bernadette Knight, Senior Director of White Spirits for Skyy-owner Campari America: “American-made vodkas are in a strong position. Vodka remains the number one spirit consumed in the U.S. and the category has shown small but consistent year on year growth. Consumers are looking for authenticity, quality and provenance, three things that American-made vodkas, especially Skyy, have been able to deliver on.”

Brands that have focused on particular regionial markets have shown that organic growth sometimes works best.

For example, a majority of Seagram’s business is off-premise and in the West, predominantly California, says Katherine Foley, Seagram’s Brand Manager at Infinium Spirits. (By comparison, Infinium also sells Crystal Head, which sells globally.) Meanwhile, new legal-age consumers are up for grabs, says Foley: “The growth with American vodka is spurred by Millennials, and this consumer market communicates and purchases dominantly through digital platforms, particularly social media.”

While talk of “terroir” is usually the turf of wine, not vodka, regionality still plays an important role in some vodkas, increasingly so with craftier producers. No discussion of regional vodka can get far without mentioning “Our” Vodka—a group of distilleries (doubling as bars) in major global cities, each existing precisely to create a namesake vodka for their locale. American outposts include LA, Detroit and New York, with Miami coming soon. The project attracted the attention and investment of Pernod Ricard.

One might infer that vodka is the new “oil” in Texas, where Tito’s Handmade, having emerged stronger than ever after a labeling controversy, is now surrounded by a bevy of Texas-made vodka brands. Deep Eddy has big plans, having just opened a brand new Tasting Room (replete with round-trip transportation available from downtown Austin).

Water quite naturally is a favorite point of distinction in vodka, as it comprises 60% of the finished liquid. Water is so central to Leaf Vodka that they produce two—one from Rocky Mountain mineral water, the other from Alaskan glaciers.

Ocean Vodka boasts of the high mineral content of water drawn off the Hawaiian coast. American Harvest proudly taps water from “deep beneath the Snake River Plain.” Spring 44, located in Colorado’s Buckhorn Canyon, is literally named after its water source.

Ingredients are another area where small producers can stand apart from the big distillers. The top-rated American vodka at this year’s Ultimate Spirits Competition was Boyd & Blair, made from potatoes near Pittsburgh. BET (pronounced “beet”) is made in Minnesota from sugar beets (not red beets, so the vodka is still clear); Comb (Port Chester, NY) is made from honey; Clear Creek (Oregon) distills apples into vodka, while Core (Hudson Valley, NY) starts with apple cider. In Nevada, Bently Heritage distills Source One Vodka from 100% estate-grown oats.

Hangar 1 Vodka, launched in 2002 and made from a mix of grain and wine grapes, recently took it one step further to create Hangar 1 Rosé Vodka, which blends the straight vodka with a Northern California rosé wine.

Of course, let’s be realistic: authentic vodka can sprout up practically anywhere; and sometimes the image is as carefully crafted as the spirit. Consider “Blood x Sweat x Tears,” made in Oregon from Pacific Northwest winter wheat and pure Cascade water.

But that’s not all… it’s made in a converted laundromat, “handcrafted with grit and fury,” and its matte black bottle is illustrated with Oregon landmarks.

Some American vodkas have used the local platform to expand nationally. Maybe the best example from Texas is Deep Eddy, whose Ruby Red Grapefruit helped the brand break out. Idaho’s 44 North and Dry Fly Washington Wheat Vodka are two more in multiple states. The New York metro area has at least two brands that have thrived regionally: Recipe 21 and Voda.

Recipe 21 was created in 2012 by Roc House Brands’ owner LiDestri Foods as an on-premise-focused brand for local distributors to expand their market, says Joe Ragazzo, VP of Sales for Roc House.

The 12-flavor brand now distributes in 11 states. “We have a favorable quality-price proposition, with good packaging and taste that over-delivers for the price. That got us into many on-premise accounts in the well, and now we are moving off-premise, too,” notes Ragazzo.

“There is a consumer that is very price-sensitive who is looking for value and quality,” reasons Lynch. “You can say that vodka is six different categories, and while the super- and ultra-premium are taking price cuts and fighting for market share, that is good for those brands like Voda that are already aggressively priced.”

Square One Botanical, Basil and Bergamot, all of which use between 7-8 botanicals each.

With purity always a vodka signature, it should be no surprise that organic vodkas are proliferating.Nationally distributed organic vodkas include Ocean (Hawaii); Koval (Chicago), made from local rye, milled on-site; and Prairie Vodka, made from organic Minnesota corn, in cucumber as well as neutral. In California, Humboldt Distillery’s Organic Vodka is filtered through virgin activated-carbon made from coconut shells; and Crop Harvest Earth’s full line claims to be distilled so efficiently that it needs no filtering.

Allison Evanow, Founder and CEO of organic producer Square One notes that their brand has distinct appeal for consumers, “who prefer quality over marketing hype,” and bartenders. “Because of their knowledge of spirits, they know that this is a big commitment for us as organic rye is not as readily available nor as easy to distill as organic wheat or corn yet it delivers a fantastic flavor profile. Bartenders have really embraced our multi-botanical approach to three of our spirits.”

For American vodkas overall, the ascent of organic offerings is just one of the numerous consumer trends that bode well for the future.

As Tito’s Polley puts it: “Over the last ten years, American-made vodka has slowly built a reputation for producing some of the best-tasting vodkas in the world. The changes in the economic landscape across the world have led people to reevaluate their priorities and that’s impacting their choices.”